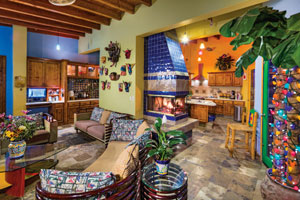 STAND IN A CORNER of the living room and you can see 10 different wall colors, from Creamsicle orange in the kitchen to basil green on the shaded veranda to hot mustard outside a back bedroom. Twenty-five hundred radiant Talavera tiles adorn countertops, stair risers, the fireplace and walls, and a dozen glistening glass pendant lamps dangle from 12-foot ceilings in the spacious kitchen. There are so many bright-colored chair backs, wall hangings, doors and frescoes that you might think you’re asleep and dreaming of a Mexican wonderland.

Then there are the dogs, six friendly Labs, all related, who rule this cleverly conceived, three-bedroom surfside roost 25 miles south of the U.S.-Mexico border in the thriving metropolis of Rosarito Beach. The solar-heated swimming pool in the sun-gorged courtyard at the heart of the house was designed for a blind dog (Oso, now deceased) with river-smoothed cobbles lining the edge so he could feel his way toward the water. After every frolic on the beach, the dogs hit the pool to rinse off the sand. Inside, they loll anywhere they please on modern furniture covered with Mexican blankets.

“There are times when we don’t have places to sit,” laughs Craig Wutsch, who along with his partner, Alonzo Nava, built the house, one of the 2013 Homes of the Year winners.

This is the second house designed for them by Ocean Beach-based architect Jim Gabriel, AIA, of the firm Hanna Gabriel Wells (designers of the light-filled O.B. People’s Organic Food market on Voltaire Street). The first was named Casa Blanca de la Playa on a similar-size lot on Verona Court in Mission Beach, and its color palette ran from white to beige. Wutsch, who calls his new abode an “urban hacienda,” explains that “Jim trained us how to separate public and private space in a house” and adds, “After all that white, I was determined to go the other way.”

Nava, a native of Coahuila, in north-central Mexico, was the interior designer. Architect Gabriel says all he did was work out the basics of the U-shaped layout, keeping in mind Nava’s large extended family, many of whom visit for long stays, and the setting by the water. “Dogs, beach sand everywhere, high flooding tides, security, it’s a harsh environment,” he observes.

Wutsch gave Gabriel’s drawings to Carlos Urrea, a local builder and real estate lawyer, who used local laborers, craftsmen and artisans to complete the job over the course of a year. Six concrete caissons were sunk through the sand to bedrock for the front building’s foundation. Urrea added a third floor to the back building. Extensive maple wood cabinetry was crafted and fitted into the concrete-block structures on site.

The courtyard separates the public space in the front, which includes the focal-point kitchen, bar, two-sided fireplace, and living room from the master suite and two guest bedrooms in the rear separate building. Unlike Casa Blanca on its 50-by 25-foot lot, which required building setbacks from the property line and a strict 30-foot height limit, this house is built out to the edge of the 30-by-70-foot lot, allowing for a much more expansive interior.

The Wutsch/Nava beach house embodies the nascent Rosarito Renaissance, after Northern Baja lost thousands of American ex-pats due to the housing bust north of the border (many had used home-equity loans for second homes in Baja), and they’ve shown how the affordable dream of Mexican retirement still lives. They paid about $350,000 for 4,200 square feet of living space, plus a swimming pool, with an unobstructed view of the sparkling
Pacific and the Coronado Islands. They can even drink the tap water (along with a state-of-the-art security system, they have a full house water-filtration system). And one last thing, hardly worth mentioning: while the property taxes on the house they sold in Mission Beach run about $1,000 a month, in Mexico their property taxes are $180 a year.

Homes of the Year: By Neal Matthews Photography by Gary Payne