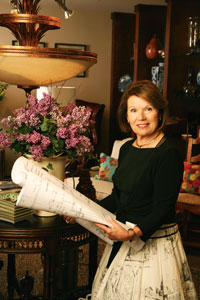 REBECCA JESSEN, ASID, CID, is an award-winning designer at Nettle Creek Interiors, where she has worked for more than 20 years. Late last year, Jessen, 66, became a co-owner of the high-end furnishings showroom and interior design studio, which was founded in 1972. Specializing as a color consultant, Jessen has more than 40 years of professional experience. She has also been a prominent member of the local design community, acting as president of the ASID San Diego chapter and serving on a number of its committees. An alumni of Penn State University, where she graduated magna cum laude with a degree in interior furnishings, Jessen has also been a mentor and guest lecturer for design students.

Q: What trends are you noticing in the industry right now?
A: The manufacturers — carpeting, fabrics, wall- coverings, furniture — nobody is stocking anything so there are lots of delays and lots of discontinueds.


Q: So that’s something consumers need to keep in mind when they’re getting involved with a project?
A: Definitely — and not be frustrated with us designers. I just had it happen. We had the carpeting on order for about a month, and the yarn system came in and the [carpet] company rejected it because it’s not up to par. So it’s back to the drawing board for the designer and frustration for both designer and client. That never used to happen.


Q: So what’s going on?
A: I think the mills, both the carpet mills and fabric mills, are in a frustrating position because the sources that they’re getting their product from either can’t afford to hire people or are getting inferior product. Just all kinds of issues that are the trickle-down effect of not having a robust economy.


Q: What’s the biggest change you’ve seen in your 40-plus years in the business?
A: Prices. That’s the big difference. But you know, good design is good design. Some of the traditional pieces of furniture that I started using, goodness, all those many years ago are still around, still being used. Some of the manufacturers are still around; I’m still using them. Some of them have gone by the wayside much to my dismay, but new ones have sprung up and we go forward.


Q: What’s the most important question to ask when someone is considering hiring a designer?
A: I think the most important thing is can we work together. Is there a rapport between designer and client? And the team? Sometimes it’s the architect and the landscape architect and the designer and the client. So I think the rapport is the big issue, and is each side open and willing to listen. I’m only as good as I can listen because I need to get to the heart of what really is the essence of the project.


Q: Do you get a lot of cocktail-party questions about what you do?
A: Invariably I feel like a doctor when I’m at a cocktail party, because you know how everybody says, “Oh, doctor, I have this problem.” I always get that. “Oh, I’ve always wanted to talk to a designer; I have this problem with my pillows.” It’s just hysterical; I don’t mind at all. I just get the biggest charge out of it because, yes, it opens up lots of conversation. And I do get to be put on my little soapbox and explain that, no, designers don’t sweep the room clean and tell you you have to get rid of everything you have and act like divas and create all these problems. And no, we’re not horribly expensive. In fact, I should save you money.
Rebecca Jessen, Nettle Creek Interiors, 858-461-4366