It’s Time to Cut Back 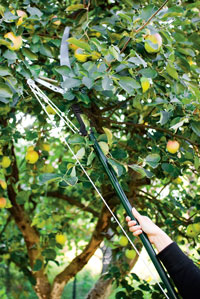 PRUNING IS ONE GARDEN CHORE that takes practice to perfect. Removing branches to shape and reinvigorate is vital to tree health and, in the case of fruit trees, productivity. Pruning done now, before dormant trees bud and flower, enhances summer’s harvest of sweet peaches and crisp apples.

Before snipping a single branch, take time to understand where fruit is produced. Apples, Japanese plums (‘Santa Rosa’), apricots and pears, for example, grow from stubby shoots or spurs that are productive for five to 10 years. New backyard orchardists sometimes remove spurs, unaware that they are drastically reducing their crop at the same time.

Prune these fruit trees now to eliminate suckers, lanky shoots or whips, crossed or broken branches, and any diseased wood. This will shape the tree, make harvesting easier and allow more light into the canopy. In addition, cut back a small percentage — one-tenth to one-fifth — of the oldest spur-lined branches to encourage new growth with new fruiting spurs.

Peaches and nectarines grow on the previous year’s long stems and thus require heavier pruning. Some experts recommend removing two of every three shoots formed the year before. As a minimum, remove about half of the new shoots and shorten the remaining ones by one–third if they are longer than 18 inches.

Oranges, lemons and other citrus grow on one- or two-year-old branches. These trees need only minimal pruning to remove broken, weak, deformed or twiggy branches and to shorten those touching the ground. This is best done in spring after the danger of frost is past.

Given each tree’s specific needs, here are some other pruning guidelines.

Have the right, sharp tools for the job: a saw, loppers big enough to cut a 2-inch in diameter branch, a telescoping pole pruner for tall trees and clippers for twigs and such. A ladder also may come in handy.

To prevent the spread of disease, in between cuts, dip pruning tools into rubbing alcohol or a weak water-bleach solution.

When removing branches, make clean, not jagged cuts, which are neither too close nor too far from the trunk. For heavy branches, follow directions for a three-step cut described in The New Sunset Western Garden Book.

Cut above a growth bud or spur when pruning to encourage new growth. Make cuts at an angle about ¼-inch beyond the selected point.

Consider the best shape for specific fruit trees. Some thrive in the classic open vase shape (apple, peach) while others (pear) are best with a central leader and a half-dozen scaffolding branches. Air circulation and light penetration also are essential for a bountiful harvest.

Strive for good looks. In today’s edible landscapes, where a fruit tree may be the focal point of a front yard, prune for aesthetics, even growth around the tree. Your reward? Luscious tree-ripened fruit to enjoy in the months to come.