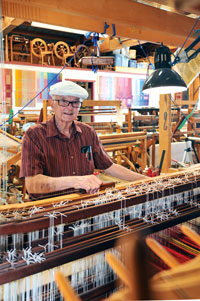 The Threads of Life

THE JOURNEY OF SELF DISCOVERY for Bill Rafnel started on a farm in Indiana where one day, as a third grader, he was sent out to plow a field alone. The patterns in plowing were perhaps a portent of the master weaver Rafnel would become.

Drafted into the army in 1953 after college at Southern Illinois University, Rafnel spent two years as an army chaplain, which, he says, “brought some meaning to my life.” Subsequently, while at divinity school in Rochester, New York, he had a country church in Morganville and studied painting at Rochester Institute of Technology. “But I got caught up with more intricate aspects and got into electronics with its thousand different forms,” he says.

During the Vietnam war he began his 20-year career as a Navy chaplain. In the course of that time he came to San Diego as Camp Pendleton’s base chaplain. For 12 of his Navy years, Rafnel took up weaving as a hobby while on board ship, using a backstrap loom secured on his body that worked well for the cramped quarters in which he was stationed.

Out of the Navy in 1985, Rafnel was 53 and living in Vista. He joined the Antique Gas and Steam Engine Museum there, which consisted of a group of retirees focused on the machinery and crafts of an agricultural past. Never ceasing his search for self, he built windmills, a tilting Don Quixote, and, among other pursuits, continued studying and weaving.

“I was still spinning my wheels,” says Rafnel, now 81. “I wanted to build my own loom, so I started with broomsticks for dowels.”

With his mechanical acumen, over time he became an advocate and devotee of textile weaving, a historically important art form that encompasses a wide variety of looms. He and other warp and weft enthusiasts started a weaving group in an old metal shed on the museum property, which has now been replaced by a new 4,000-square-foot facility he helped fund called the Weaving Barn.

Over the years, master weaver Rafnel also helped gather and facilitate the donation of the 50-plus looms the Weaving Barn contains, the oldest a circa 1840 barn loom from West Virginia. Weavers and spinners, including Rafnel on his Dobby loom, gather here weekly, usually Thursdays, to work and teach. There’s a program specifically geared toward the mentally handicapped that he clearly finds inspiring.

Besides teaching spinning and weaving, Rafnel produces an endless stream of decorative textiles.

“I learned that damask is for me,” he says of his five-thread expanded-twill table runners and wall hangings that move from color to color like endlessly reimagined rainbows. “I like it because it has more luster and a sharp cut.”

In the past he took his work to American Craft shows in San Francisco and Baltimore and was represented by a variety of galleries. Today all sales take place at the Weaving Barn.