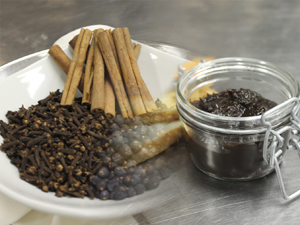 This 38-acre destination property is in the heart of Temecula wine country. Since opening its doors in 2003, South Coast Winery has garnered over 1,600 awards and medals in both domestic and international competitions and has been named “Best Winery in California” two years in a row. The property also has private villas, a gourmet restaurant, tasting room and a luxurious spa.

Pumpkin butter makes a great holiday gift for friends and family and is very easy to prepare. The name is a little deceiving because butter is not in the recipe, and it’s actually quite healthy. It makes a yummy spread for toast and can also be used in some recipes as an alternative for fat (same as applesauce).

1. Combine all ingredients in a large saucepan; stir well. Bring mixture to a boil. Reduce heat and simmer for 30 minutes or until thickened. Stir frequently.

2. Put into sterile containers and chill. Give as a gift or just enjoy it yourself.