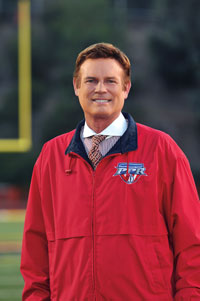 THE JOURNEY WAS A BIT ABSTRACT, but KUSI TV’s John Soderman always knew he wanted to do two things: play music and report the news.

Born and raised in New Jersey as the oldest of six kids, he was surrounded by music. His father, a handsome and charismatic crooner, was known as the Frank Sinatra of Sweden.

Soderman went into the Marine Corps after high school. While there the Los Angeles Dodgers scouted him for his fastball. He was a 14th-round draft pick in 1978, and played three years of professional ball. “My claim to fame is that I gave up a homerun to Tony Gwynn in his rookie year,” Soderman says.

Baseball didn’t work out, and two years as an Orange County police officer only served to reinforce his desire to cover the news. “I loved police work, but all I could think about was covering TV news,” he says.

Soderman’s stepmother at the time was Danuta, a popular San Diego TV-show host. “Danuta was extremely encouraging,” he says. “She helped me get my tape together and pointed me on my way.”

His first TV job was at KHSL in Redding. After covering the news in seven cities he eventually made it to KCOP in Los Angeles — an early career goal for him.

In 1999 Soderman came to KUSI where he reports the evening news Wednesdays through Sundays. A highly respected reporter, he also is known for his on-air humor — he wears shorts rain or shine and at the slightest provocation breaks into a little dance he calls “the South Bay Shuffle.”

He is also extremely proud of a high school football show he has been doing for 13 years called the Prep Pigskin Report (PPR). “High school football is truly the last innocent stage of the game, and I’m just so pleased to be making a difference with some of these kids,” he says. “It’s the greatest feeling in the world when kids we’ve featured on the show grow up and come back to thank us.”

Not long ago he felled a personal demon. Watching his father go through marriage after marriage, he never thought he could commit to such a union. Then he fell in love with and married a Brazilian woman named Dalva. They now have a three-year-old boy, Matthew, whom he dotes over at every opportunity.

The former tough-guy Marine, who threw 95-mph fastballs and wore a badge, seems to have finally achieved all he wanted in life. Oh, and the music? For the past nine years Soderman has been the drummer in a hot Motown group known as the Corvelles. It seems his only limitation is that he can’t perform the South Bay Shuffle while playing his drums.