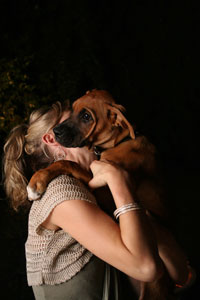 Custody battles for dogs are on the rise

"TRACY” AND “MIKE” SAT at the conference table, waiting for their attorneys to agree on the last part of their divorce-dispute resolution. The conference had come to a satisfactory settlement, except for one decision: Who gets the dog?

Dividing assets and personal treasures are difficult when couples divorce, but pet custody is becoming a T-bone of contention, too. Take, for instance, the recent custody battle over Puggles in which Dennis Derrich spent $60,000 to bring his dog back to New York after his ex took the dog to Los Angeles. Or the case of the San Diego divorcée who spent more than two years battling for the custody of Gigi, hired an animal-behavior expert to do a study on “canine bonding” (accompanied by a video documenting a day in the life of Gigi), and had legal bills that reportedly ran in excess of $140,000 by the end of the trial. That’s a lot of kibble!

Since animal laws (generally referred to as “Laws for Paws”) came to the forefront about 10 years ago, there has been a 23-percent jump in pet-custody cases. That’s because, more than ever before, pet owners consider their pets to be family. Legally, however, pets usually are deemed personal property — no different than a flat-screen TV.

So, what happens to pets during di-vorce proceedings? I interviewed San Diego attorney and certified family-law specialist Julia M. Garwood, owner and senior attorney at Garwood Family Law and Mediation, to get the scoop.

Q: How do pet owners come to an agreement on ownership during a divorce?

A: When parties are in agreement, some-times they consider sharing their animal, and a sharing arrangement is worked out. This is not necessarily called “custody.”

I also have seen “visitation rights,” where the party that keeps the residence keeps the pet and the other party sees the pet and takes it with him for five hours on a Saturday, for example.

Sometimes owners decide that the pet goes with the children. If the father has custody of the children, then he gets the pet, also.

If there are two pets and no children, the parties may agree that each party gets one of the pets. Or, for example, the wife takes the cats and husband takes the dogs.

Q: I’ve read articles about courts awarding “petimony,” which is like alimony except for pets. I’ve also read that the owner who is the primary caregiver for the pet is a consideration in pet-custody battles. What are some other considerations?

A: Often it depends on who lives where and whether there is a “pet welcome” policy at the new residence. (Once, I got the court to order that the dog be awarded to my client after we submitted pictures of the dog tied to the outside of the house in the rain.)

If the pet is purebred, the owner will be named on the title and that person “owns” the animal. Usually when this is the case, though, we find that the pet was a gift from the other party. Gifts, by definition, are considered to be the separate property of the person to whom they were given.

If one party obtains the pet before marriage, then that party owns the pet.

Q: Who pays for food and care, including vet bills?

A: The parties usually agree as to who pays the vet bills. The issue of vet bills often comes up if the pet is sick and/or old.  One party keeps the pet and pays for the food but they split the vet bill. Burial costs are usually part of the veterinary bill.

Sandie advises: Do what’s best for your pet and place it where it will get the most companionship and loving care. To handle bones of contention and make life a lot easier if there is a custody battle over your pet, do the paperwork ahead of time. You can get legal paperwork on line at such places as Legal Zoom or write an agreement yourself about your pet … but don’t forget to sign it!