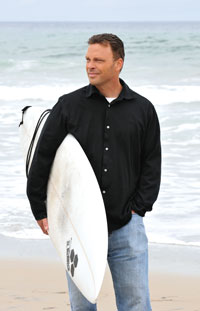 In 1998, Tom Jordan packed up his life and drove to his first TV news job at a small station in the state of Washington. Leaving his hometown was a big deal to the avid surfer who’d grown up in Del Mar.

“When I drove up the coast with my wife, Annie, there were nearly tears in my eyes,” says Jordan, a graduate of Torrey Pines High School. “We had one main goal when we left — to get back here as soon as possible.”

The NBC affiliate where Jordan learned the ropes was tiny (the facility had formerly been a funeral home). Jordan absorbed the business — covering three stories a day, anchoring, even filling in as weatherman.

A year after leaving San Diego, Jordan found himself back in Southern California … in Palm Springs. He started at KMIR (NBC) on May 26, 1999. (Jordan has a propensity for remembering exact dates, even times, of major events in his life.)

It was December 1, 2007, when he achieved his career goal and started at KUSI-TV (whose parent company also owns San Diego Home/Garden Lifestyles). Currently, he’s a weekday anchor/reporter on Good Morning San Diego, and a weekend anchor.

Jordan spent the majority of his TV career reporting hard news. Two weeks into Good Morning, he found himself in a heated interview on city pensions with the Rev. Al Sharpton. Sound bites from the interview went national.

“I’m not Mike Wallace, but I wasn’t going to step down from an intimidating situation,” says Jordan.

Now, he’s enjoying the diversity of personalities that appear on the morning show. And, he’s relishing the ubiquitous Mexican food (especially Tony’s Jacal in Solana Beach), the ocean and the idyllic climate in the city he never wanted to leave.