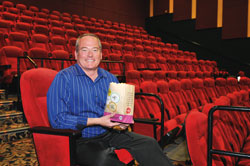 The festival is going in-to its 11th year with a new head of steam, generated in large part by Leap and a new board of directors (note: San Diego Home/Garden Lifestyles is a media sponsor of the SDIFF).
Leap says the number of movies shown will increase in quality and quantity, the parties have been revamped and an additional location for screenings in La Jolla has been added to the traditional downtown Reading Theater (Gaslamp 15).

Headlining the festival is a retrospective focusing on two-time Academy Award-nominated director Gus Van Sant (Good Will Hunting, Milk). Van Sant, who also directed Even Cowgirls Get The Blues, My Own Private Idaho and several cable television music videos, will be on hand at The Museum of Contemporary Art San Diego in La Jolla for a question-and-answer session.
Making a special appearance at the downtown festival is Rod Roddenberry, who will show his documentary Trek Nation. Roddenberry’s father, Gene, was the creative force behind the Star Trek television series.

The festival runs from September 26-30. The opening night party will be held in the downtown Fluxx nightclub. Leap says there will be an outdoor “Almost Famous” block party outside the Reading Theater, as well as a “Filmmakers Brew-Ha-Ha” at the new Block 16 lounge.

“Our goal this year is to really raise the bar,” says Leap. “We want to triple attendance, among other goals. We’re doing aggressive marketing, working with other film festivals, doing out-of-market reach, and, of course, doubling the venues.”