Not Your Average Artists 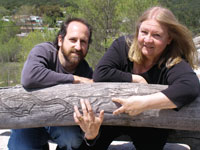 Debby and Larry Kline are not your average artists. How could they be, with a collection of go-to materials including light bulbs, ceramic, mud — and ketchup?

“For us, part of the magic is exploring and working with media that we’re unfamiliar with,” says Larry. “I think that’s when the really interesting stuff happens.”

With one look at the Klines’ portfolio, it’s obvious there’s no shortage of “interesting stuff.”

Debby and Larry met at the Herron School of Art and Design. The two began working together creating informal, almost accidental art. It was the start of their fun collection of dinner-related design, My Dinner with the Klines, in which the artsy pair creates masterpieces from the likes of wrappers, napkins and condiments.

“We would sit after a meal and talk for hours, and this paper work sort of became a byproduct of our relationship and our ability to work together,” says Larry.

In 1999, Debby and Larry, who both teach at the Design Institute of San Diego, started to join forces on larger-scale pieces carrying lofty social messages.

“We pose questions, but we don’t always answer them,” says Debby. “We just try to pull things to people’s attention and let them take from it what they will.”

One of the couple’s favorite pieces, The Game at Hand, a fanciful chess set addressing war in the Middle East, did just that.

“It was one of those rare pieces an artist makes that once out in the world takes on a life of its own,” says Debby.

It doesn’t take much for the Klines’ work to spark commentary, though. Their one-of-a-kind designs coupled with often polarizing topics (healthcare and self-medication, California’s energy crisis, religion) produce works that catch attention wherever they’re displayed, from La Jolla to San Francisco to Jerusalem.

Always looking to expand their arsenal of tools and techniques, the Klines use every opportunity to experiment with art — down to their recent bathroom remodel.

But according to Debby, unlike anything they’ve done before, the project wasn’t too difficult.

“Once you’ve built a dome in Jerusalem, you can build just about anything.”

(Look for the Klines’ exhibit at the La Jolla Athenaeum in September.)