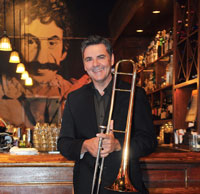 DAVE SCOTT COULD HAVE EASILY SPUN OFF in a variety of career directions. The KUSI-TV meteorologist/reporter has played golf since he was four years old. He was the 1975 Grossmont Union High School District golfer of the year. The next year, his Grossmont College team won the California State College championship.

Scott jokes that his parents were Scottish, and in the birthplace of golf, playing is mandatory.

“My dad said, ‘Ya bloody well will play, and that’s that,’” Scott recounts with a Scottish accent.

In the early 1980s, he played in a regional qualifier for the U.S. Open. Scott shot an opening day 67 to lead the pack, but wound up finishing second, one shot away from making the cut.

But then, there’s always been Dave Scott the Musician. Since 12 years old, he’s played trombone. Scott bought his first instrument from Louis Armstrong’s trombonist, “Trummy” Young. Living in Hawaii, Scott earned a two-year scholarship with the Honolulu Symphony. He was nominated for Jazz Artist of the Year at the 1998 San Diego Music Awards. He’s in two groups (Monsoon, The New Slide Quarter) and plays every Monday at Croce’s in the Gaslamp Quarter.

Betwixt the golf and the music, there was Dave Scott the Barge Captain. He earned a captain’s license and spent three years navigating the Canal Nivernais in France.

A letter from his dad, asking him to finish college, brought Scott back to the United States. After graduating from San Diego State University, he helped with his father’s typewriter business. KUSI (which also owns San Diego Home/Garden Lifestyles) placed an order, and when he visited the studio, the lights went on (literally) and Scott found his calling.

He started on air in Yuma and Tucson. But this year marks Scott’s 20th year with KUSI. He ditched his trademark bow ties two years ago. Along the way he’s danced with Carol Channing, sung with Robert Goulet and laughed on camera with Robin Williams.