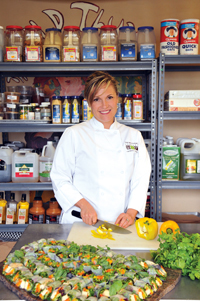 From food to drink, San Diego’s top female foodies are continuing to expand their impact on the local restaurant industry.

Back in February, St. Germain’s launched Lady Chef, a yearlong, girl-power-heavy dinner series curated by Nino “Neens” Camilo, founder of the I Love Poke Festival. Every three months, St. Germain’s visitors have been treated to special dinner menus dreamed up by some of San Diego’s best female chefs in collaboration with the restaurant’s very own executive lady chef, Kaitlin Ramos.

Isabel Cruz, executive chef and owner of Barrio Star, Coffee Cup and Isabel’s Cantina, kicked off the series with a book signing and weekly Taco Tuesday specials followed by Kari Rich, owner and executive chef of Farm Food Truck, who took her turn at the restaurant in May.

Dawn Parks, owner and executive chef of The Wild Thyme Company-Catering and Events, and Alvanette Kauwalu, San Diego-based personal chef, will put their own spin on St. Germain’s menu in August and November, respectively.

“The series is a great supportive and collaborative environment for women chefs,” says Parks. “I feel like women are really coming out of the woodwork and becoming more dominant in the industry.”

The influence of leading ladies in San Diego’s restaurants doesn’t stop with what ends up on patrons’ plates, though. It’s pouring over into their glasses, too.

The number of women sommeliers calling the shots at San Diego eateries is steadily increasing.

“When I moved to San Diego I was the only woman at my first job,” says Cristy Slocum, wine buyer at Farmhouse Cafe. “Now women are sort of paving the way for each other.”

San Diego is home to two of the 68 female Advanced Sommeliers in North America, the second-highest classification you can earn from the Court of Master Sommeliers. The city’s first is Megan Yelenosky, wine-program director of the Hilton San Diego Bayfront, and (appropriately surnamed) Lisa Redwine, food and beverage manager of the La Jolla Beach and Tennis Club.

“I try to assist other young woman in our industry,” says Redwine. “As time goes on I hope that it becomes a genderless industry — one based upon the knowledge that you have, rather than if you’re male or female.”