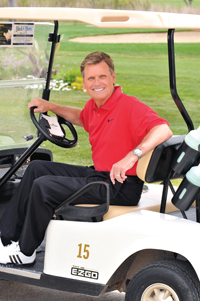 In The Driver’s Seat

Ross Becker anchors the weeknight news-cast on KUSI-TV … by himself. There’s no co-anchor, a rarity for an 11 p.m. news program.

Yes, but the good kind says Becker, who has nearly 40 years of experience in local and national media.

“I’m the one with the steering wheel in my hands,” he says. “I’m the one driving — whether I hit a tree or veer off the road. It’s a good feeling, I think, to be in control. It’s why some people think it’s better to be the pilot of an airplane than to be a passenger. You’re in control of the action.”

With control comes a certain level of stress. And Becker’s means of relaxation involves drivers, putters and 18 holes of golf. He’s a member at Morgan Run, and is a 6-handicapper who regularly shoots in the low 70s.

“Golf is one of my passions,” he says. “It’s a way to get your body and your mind away from a frenetic business. You can step on the golf course and take a deep breath … and the tension melts away.”

It was a golf buddy/video producer who involved Becker in the seminal moment of his four-decade media career. In January 1996, Becker was hired as a freelance journalist to conduct a 90-minute interview with O.J. Simpson.

This was the first interview with Simpson following his acquittal on murder charges (pre-civil case). The interview generated international controversy because it was created to be sold as a pay-per-view videotape.

“At the time, I was the only one who’d had access to O.J.,” says Becker. “I looked him in the eye and asked him, ‘Did you kill your wife?’ It was basically a cross-examination.”

Becker has been with KUSI (whose parent company owns San Diego Home/Garden Lifestyles) since 2009. He and his wife, Linda, previously owned three radio stations in Kentucky. Becker had a brief stint with MSNBC, and spent 20 years co-anchoring news broadcasts in Los Angeles (KCBS, KCOP).

“When I was in L.A., San Diego was always our weekend escape,” he says.