Those men of the cloth do it again… 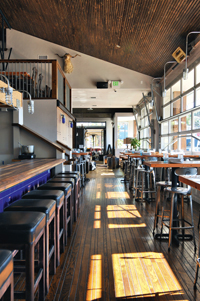 GINGHAM IS THE LATEST restaurant in the feverishly growing fabric-named chain conceived, owned and operated by James Brennan and Brian Malarkey. As their newest venture, Gingham is chock-full of the Brennan/Malarkey touches: whimsical and eccentric décor, an eclectic menu, and a list of entrées under $20. The biggest surprise is that the restaurant is in La Mesa, nestled within its very charming village.

Serving a hip atmosphere and New American cuisine, Gingham is a long, narrow restaurant with fanciful cowboyish décor suggesting a saloon in the Old West — the sort of place Billy the Kid might frequent, if Billy had been a bon vivant. There are several separate dining areas, including an outdoor patio and an upstairs loft, and two distinct bars. The whole place is rowdy, lively, convivial and happening.

There’s an excellent venison carpaccio salad and the whole fried fish — some-times trout and sometimes catfish — is impressive. The slab of smoked pork shoulder and the half-rack of baby back ribs are tasty but often dry. Venison osso bucco falls off the bone, as it should, though its lukewarm temperature is unusual. Some menu combinations are more peculiar than clever, with equally odd execution. The sweetbreads are served underdone, accompanied by pickles and blue-cheese ranch dressing. Unsurprisingly, chewy sweetbreads are not good eats. Desserts tend toward the ooey-gooey.

Patrons: Mostly folks from the area, predominantly in couples. The 21-to-40-year-old crowd comprises about 70 percent of the patrons.

Parking: It’s all on the street