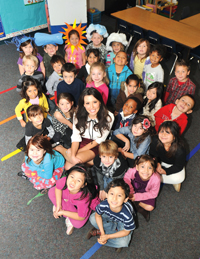 LESLIE LOPEZ HAS NEVER BEEN a contestant on Are You Smarter Than A Fifth-Grader?. But the KUSI-TV weathercaster, who regularly does live remotes from elementary school classrooms, did find herself in a moment reminiscent of the TV game show.

“I usually get asked how I got on TV or how I know what the weather is going to be,” says Lopez. “Out of the blue, one of the kids asked me what an anemometer was. We were, literally, in a fifth-grade classroom at Holy Trinity. Obviously, the teacher had prepped them to have some good questions ready.”

Luckily, Lopez knew the tools of her trade (an anemometer is a device used to measure wind speed).

It’s been nearly a year since the Chino Hills native and UC-Irvine graduate joined the team at Good Morning San Diego (co-owned by the parent company of San Diego Home/Garden Lifestyles).

Believe it or not, Lopez was an accounting major, and became a financial planner after college. She began writing website collateral, which developed into a freelance writing career for several Orange County newspapers.

That led her into writing/producing stints at Los Angeles TV news stations, and an on-air opportunity on a weekly newscast called This Week In Torrance. Before arriving at KUSI, Lopez was doing on-air news and weather at KGET in Bakersfield.

Her off-air activities are diverse. She competed in high-school water polo, and now likes to swim and surf in the ocean. But she also has taken up … woodcarving … and the violin.

Neither hobby is shaping up as well as yet another pursuit: writing a children’s book. It’s unlikely her in-process fairytale will make mention of an anemometer. But she hopes that a book reading may someday be another reason for her to face down a room full of fifth graders.