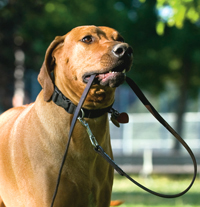 My dog Schmoozer seems to know when it's spring, and also knows that means longer walks. She retrieves her leash, stands by the front door and the woof ritual begins. Our daily meet-and-greet adventures always holds countless surprises — and we get a plethora of column ideas.

This column, for example, got its start when we witnessed a leash tangle with two other dogs that involved a nip. I wondered, "Is there a law?" I called Dawn Danielson, director at the County of San Diego Department of Animal Services (619-767-2605) and it turns out there are a number of laws having to do with dogs. Here are a handful of examples.

Situation: There are "hi" woofs and grand "hellos" as you and your poodle, Poopsie, approach Toby, a giant Schnauzer, and his owner. Toby starts the circle dance and the leashes become entangled. You become lassoed and try to figure out how to get out of the circle without falling. Poopsie and Toby are chasing each other and also get tangled. Toby decides he has had enough and nips your ankle. Who pays?

Danielson: As this is a civil case, the decision is really up to the two parties. Common sense tells us that the person who owns the dog that did the biting should offer to pay, but this is not a legal requirement. If, however, the person who was bitten sued the dog owner, the matter would go to court and be decided on by the judge.

This situation could be interpreted as a violation of the leash law because that law requires the owner to have control over the dog. A dog being on a leash is not enough. The person holding the leash must have control. San Diego County Code 62.669 re-quires dogs to be on a leash no longer than 6 feet and held by a person who can actually control the dog. If the owner had control, there would not have been a problem.

One more thing: If the skin was broken by the bite, that dog would be placed in quarantine for 10 full days, as required by State law (San Diego County Code 62.617), to ensure the dog did not have rabies at the time of the bite.

Friendly is as Friendly Does

Situation: You and your brindle whippet, Jack, are out for an evening stroll. Jack is on a leash and having a "doggone" good time. Suddenly, without warning, an off-leash Dalmatian is headed your way. The owner is chasing him and yelling, "Don't worry. My dog is very friendly." Jack's posture hardens, his tail goes to a salute, and he prepares him-self for this very, friendly dog. Ms. Friendly, however, decides that her owner's assessment is sadly mistaken and bites Jack. Who pays?

Danielson: As in the previous case, "who pays" is a civil matter and common sense dictates that the owner of the biting dog should probably offer to pay any veterinary bills, otherwise the owner of the dog that was bitten could sue the other dog's owner. If that should happen there are at least two law violations here: the leash law (afore-mentioned) and a "public protection from dogs" law (San Diego County Code 62.669). This owner could be facing two misdemeanor violations because she failed to be responsible.

Situation: You are taking your "Heinz- 57" rescue pooch, Peppy, for his daily "business" trip. You've brought along your designer pick-up bags. After all, there's no reason why you can't be stylish when you are trying your best to be good to your neighborhood and help the green movement. You observe another dog owner not doing the pick-up. Did they forget to bring their doggie pick-up bag? Did they run out of bags? Or are they one of those folks who deliberately do the "bogus" pick up? (You've seen them — they look like they are cleaning up after their dog but, in fact, they are not.) Are any of these legitimate excuses?

Situation: You're invited to a neighbor's party. Sure you can bring the kids! The margaritas are flowing, the chips and guacamole are being devoured, and suddenly you realize that your 2-year-old, Jude, is not in sight. Turns out that Jude has headed for Buster, the family's 12-year-old retriever who is taking his late-afternoon snooze. Jude thinks he's petting Buster, but what he's really doing is tugging Buster's ears and pulling his golden hair. Just as your toddler gets ready to jump on Buster's back for a ride, you come to the rescue. Luckily, Buster did not nip or bite Jude. But what if he had? Who is to blame?

Danielson: Regardless of who is to blame, shame on mom for not watching her child and shame on the dog owner for not having her dog in a safe place. Buster's owner should offer to pay the medical bills or the child's mother could sue the dog's owner for damages. Even though, in this case, it was an irresponsible mother who allowed her child to wander, it is the dog owner's responsibility to keep their dog out of harm's way. The aforementioned San Diego County Code 62.669 applies as does San Diego County Code 62.617 (if the child's skin was broken.) This is what the law dictates, but I think it is important to say: Never, never, never leave a toddler alone with a dog.

For comments and ideas, reach us at slampe1@san.rr.com