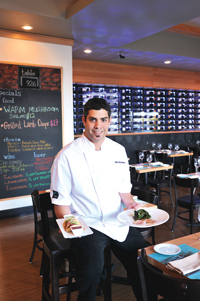 A terrific new bistro in a site rich with food history…

TABLE 926 IS THE PLACE for really smart new American comfort food served bistro style. But it doesn’t look like a bistro.

Instead, Table 926 is a medium-sized box, decorated as if it were a Scandinavian Zen  chamber: light wood floors and tabletops, grey walls and banquettes, dark wood chairs and sparkling white dinnerware.

Table 926 offers barely more than a dozen items for dinner, yet every one is intriguing. Among appetizers, standouts are the chicory salad with bacon and a poached egg, in large measure because the verjus vinaigrette is spot on: flavorful, tart, and just the right counterpoint to the sharp chicory. Excellent duck carnitas tacos combine shredded duck, duck cracklings and pickled onion in soft corn tortillas. Diners can lather the tacos with accompanying avocado and smoked chili salsa.

Among the entrées, the braised lamb shanks are meaty and gorgeous, and the oxtail ragu with a hearty dollop of herb-and-lemon infused ricotta becomes addiction on a plate. Also impressive: squash empanadas with sour-cherry sauce, chicken breast with chestnut and shitake stuffing, and salmon with arugula and chimichurri.

Oink if you love all things porcine…

THE ONCE-LOWLY PORKER found its way into all sorts of kitchen preparations over the last few years, though now it’s reached a natural conclusion: virtually everything at Carnitas’ Snack Shack involves some-thing piggy.

Behind the pork is Hanis Cavin, a San Diego chef who’s led the kitchen at such notable restaurants as Chive, Kensington Grill and Pacifica Del Mar. His new place is named after his pet mini-pig Carnitas, hence the apostrophe.

It turns out that the Snack Shack is not so much a restaurant as a walk-up win-dow. In back is a covered patio with tables and chairs and a country-cabin sensibility. It’s the sort of place normally found on a beach in Cabo or at Coney Island, but instead it’s at the edge of the sidewalk in North Park.

Snack Shack rotates its menu daily, but some constants include an excellent slab of pork belly with a molasses-style sauce, a wonderful carnitas torta, and the pulled-pork sandwich. French fries are highly seasoned and thoroughly habit forming, though not especially crisp. There’s a daily vegetarian item and a steak sandwich. Occasionally the menu will feature pork poutine, a BLT, a Vietnamese banh mi sandwich and even roast chicken. Specials tend not to be as good as the standard fare, and getting food to the table hot (and not room temp) is a bit of a problem.

SERVICE: Patrons order at the front window and food is served at the back patio.

PATRONS: Locals along with the curious and the hungry of all ages, professions, and body embellishments

ARSALUN TAFAZOLI GOT IT more than right with his Neighborhood and Craft & Commerce restaurants. Now he has a fabulous third hit with Underbelly.

Though it’s been described as serving Japanese food, the cuisine is really a bit of Asian, a lot of fusion and a bundle of ramen.

A tiny place — it seats about 30 — Underbelly is a spare, hip, industrial, clever-as-the-devil space. There’s a U-shaped counter and ingeniously designed wrap-around windows that open so diners can eat both inside and outside the restaurant’s walls. It’s ultra-casual and a vibrant sensory experience.

The short menu features starters like a brisket mu shu — essentially a slice of beef inside a crepe with a squirt of hoisin sauce. It’s wonderful. Another soul-satisfier is the inventive seven-radish salad accompanied by a crisp slice of toast covered with a schmear of ahi.

All main dishes are soups built around delicious egg ramen from Hawaii. The house special, Underbelly Ramen, includes pork belly, bacon and sausage in a flavorful broth. Spicy kimchee ramen is filled with carrots, cabbage and peppers, and is not for the timid. Possible add-ons include unagi, short ribs and even soft-boiled eggs. The baby octopus and eggplant-wrapped tofu add-ons are more creative than wonderful. Vegetarian and vegan menus are available, but spoons are not. Be prepared to slurp your broth.

SERVICE: Patrons order at the counter, get a number and have food delivered to their table.

PATRONS: Mostly hipsters, young and old, along with tourists who wander down from India Street

NOISE: Because the place is small and the ceilings high, the noise level rarely goes above