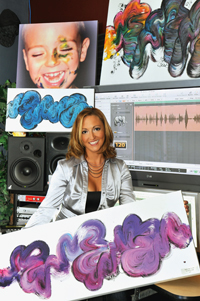 Laughter is an uncontrollable emotion that brings joy. It’s not, however, something you’d normally see depicted graphically in a painting.

Sonja Landis, 35, is a Carlsbad artist who brings laughter to life with the stroke of a paintbrush (and some help from sound engineers).

Landis started The Painted Laugh about three years ago, when she heard her son laugh and saw colorful sound waves swirling around him.

She has a documented but not widely understood condition called Synesthesia. It’s a neurological condition where two senses involuntarily cross. Her type allows her to see sound in the air.

When Landis first painted the sound waves of laughter, she did it for herself and hung a piece above her mantel. Once people saw the painting, everyone wanted one. It eventually evolved into a business and she has been distributing them all over the country ever since, and plans on selling internationally.

After the paintings became popular, she decided to add actual sound. This way, parents and grandparents could hear their children’s laughter whenever they wanted. A button is placed behind the canvas of her paintings. Push it and it plays a recording of your child’s laugh. “There is a universal truth to laughter that doesn’t need an explanation between cultures and between languages,” Landis says. “And that’s what I love about this the most.”

Landis has partnered with Crayola, and has experimented with laughter therapy for children’s hospitals.