Muriel’s Garden, Direct From The Grave 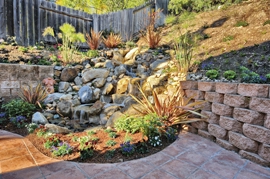 WORKING ON A JOB WHERE INTERACTION with the client was literally impossible was a first for veteran landscaper Harry Thompson.

A face-to-face meeting is out of the question, however, when the customer is deceased.

Thompson, who’s run Torrey Pines Landscape Company for 35 years, was contacted last year by a Scripps Ranch homeowner about a garden makeover. When Thompson arrived at the house, 86-year-old Walt Bossert showed him inside.

Thompson noticed a number of cards being displayed on a dining room table.

“I saw that they were sympathy cards,” he says. “I found out Walt’s wife had passed away after a battle with cancer.”

Walt and Muriel had run a business together, and were married for nearly half a century. The widower wanted to hold a commemorative get-together. But Muriel had always presided over the garden. He recalls that last August, a week before she died, the project was at the top of her to-do list.

Walt was sure Muriel would have been embarrassed to have acquaintances see a run-down version of the backyard exterior.

While Thompson sat in the Bossert kitchen to talk about the remodel, Walt produced a file Muriel had been keeping. The folder contained: lists of plants she liked; names of companies that made waterfalls; several pages from San Diego Home/Garden Lifestyles (Muriel had subscribed for decades).

One of the pages in the folder was an advertisement Thompson had run in our February 2008 issue. The ad showed red and yellow roses, and the tagline read: “Fall In Love, Again … With Your Garden.”

Walt hired Thompson. The way Thompson saw it, he now was working for a client who’d never be able to comment on the process. His main direction would come from Muriel’s file.

“It gave me an added sense of obligation,” he says. “In all my years doing this job, I’d never worked for someone I could never meet. I really wanted to please her. I especially wanted to do a good job for her.”

The garden was set on a rocky hillside. The remodel was set up for low-water use. Thompson planted semi-native plants — azaleas, impatiens, clivia — that will cascade down the slope.

As of late last year, Walt and his family hadn’t had a chance to have the life celebration. That’s partly because the garden is still growing in, and partly due to Walt suffering from a case of pneumonia. He was recuperating in a nursing home, though, and the prognosis for recovery was good.

Thompson, for one, is emotionally invested in seeing Muriel’s garden blossom and fulfill its destiny. Walt expressed satisfaction with the job (though he hadn’t had much of a chance to enjoy it, yet); his oldest daughter, who lives in Northern California, also is very happy with the outcome.

Walt says they stuck as close as possible to Muriel’s garden plan — with the exception of removing a Monterey Pine. “She probably would have been pissed about that,” he reflects.

But Walt is planning that sooner than later, he’ll gather friends and family on a Sunday afternoon, open a bottle of champagne and raise a glass in memory of the fertile life of his late bride.

No, Muriel will never get to weigh in. But her landscaper firmly believes that “somehow, she can look down and see her new garden.”