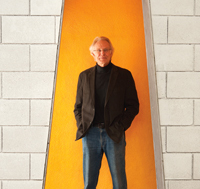 {jcomments on} Dialogue: By Mark Hiss Photography by David Harrison

Perhaps no San Diego architect since Irving Gill has left as much of an imprint on the city as Rob Wellington Quigley.

A native Southern Californian who has been in San Diego since the early 1970s, Quigley and his firm have worked on myriad projects, from affordable housing units and single-family homes to The New Children’s Museum and the Solana Beach Transit Station; most high profile of all is the oft-delayed New Central Library, which Quigley is “absolutely sure” will open on schedule in 2013.

A recipient of dozens of honors and awards, including the American Institute of Architects’ prestigious Maybeck Award, his joint proposal (with Sasaki & Associates) for a bold reimagining of the bayfront — known as Arc Walk — was selected in competition by the Port of San Diego.

An early proponent of sustainable, green design, he established an office in Little Italy some 25 years ago, helping lead the resurgence of this once-forgotten neighborhood. Quigley recently relocated to new live/work digs in the East Village, a move he feels is a “rebirth,” putting himself once again on the front lines of urban development.

Q: Your work is known for its empathy and understanding of place and use. Is that something that came to you innately or was it taught, or learned, over time?

A: Actually it comes from a very specific experience. After graduating from college I joined the Peace Corps; this was during the Vietnam War days. And the Peace Corps was a much more humane way to serve your country than shooting people for whatever corporation was in power at the time. So living in a very isolated rural town in South America for two years really gave me almost a platform for looking back at this country and thinking about architecture and what I wanted to do with my life. And it just became extremely clear — especially in that
era — that modern architecture was not addressing the issues of place or issues of region or climate or local history.

A: I have mixed feelings about LEED. It is essentially a system designed to force people who could care less about saving energy into saving energy. And so for those architects who are really focused on that as an integral part of their practice, if anything, LEED is a waste of money. We never suggest to our clients that they have a LEED-certified building because so much of the budget goes into the bureaucracy of LEED certification. That’s money that I could spend on making the building even more energy efficient. So it has its problems but the great thing about LEED is that it has given non-architects — civic leaders and council people and city managers and people like that — a yardstick, no matter how flawed. It’s given them a way to quantify whether a building is more energy efficient or less energy efficient and that’s been a good thing.

A: The Port of San Diego has not won very many architectural awards and this one did. And they’re the ones that selected it after a very expensive — expensive to the architectural profession anyway — competition that they sponsored. So I’m hoping that they’re acting in good faith. Obviously right now we’re in the middle of a recession; it’s not the time to move forward with it but I’m hoping that at some point they will go forward with it. It’s not a timid project. It’s an iconic project and it will take a very visionary group of people on the board to go forward with it I think.

Q: Do you still surf?

A: Oh sure, absolutely. I go to Old Man’s Beach where I’m never the oldest guy out. Tourmaline. … I haven’t been as consistent as I like to be, but yeah, it’s still my Zen moment; that’s where I cleanse my mind and my body.

A: I’m 66. Good architects by the way, if you look historically, they start doing their best work usually in their early 60s. From 60 to 80 is pretty much the prime time of an architect. It’s an old man’s profession. That’s why building our new offices here we feel like we’re just now mature enough to really understand architecture.