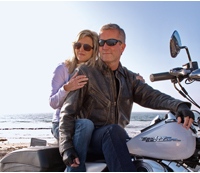 A Resolve to Ride

Every New Year’s Day, morning show anchor David Davis resolves to get up early for a morning ride on his Harley-Davidson Road King motorcycle. The jaunt typically roars up U.S. 101, along San Diego’s shining coast.

Davis has been in town since 2003, and was working in Milwaukee before joining KUSI-TV (whose parent company also owns San Diego Home/Garden Lifestyles). He quickly fell in love with the idea of being able to ride year-round.

“I did a story on a five-day group ride from Florida to Milwaukee,” he says. “We rode Harleys during the day and reported live each night. From that moment on, I was hooked.”

When Davis isn’t cruising San Diego County on his bike, he might be found running on the beach. He’s completed multiple half-marathons, including one in blistering Death Valley. He jogs to keep in shape, despite his early-to-rise morning TV schedule.

Davis says he enjoys finishing the workday by noon, but: “Three in the morning comes awfully early.”

His career has taken him from Las Vegas, where he reported on organized crime, to New York, where he reported live on the aftermath of 9/11/2001 for his Milwaukee station. He’s done stories on flying with the Thunderbirds, and once witnessed a nuclear explosion from an underground bunker in New Mexico.

Davis is married to school teacher and former TV news reporter Staci Ortiz-Davis. She still fills in on occasion on KUSI, and the couple seems to be making a tradition out of anchoring Good Morning San Diego during Christmas.

The Davises claim a unique pet: a sea turtle named B.B. Scooter. Davis rescued him while out on a run. The turtle has been part of the Davis family since last year, and has his own Facebook account.

“He has more Facebook friends than I do,” jokes Davis (though a recent count showed Davis had revved ahead of his turtle).