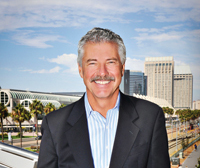 Planners estimate the San Diego region will grow by 40 percent (or 1.3 million people) over the next 40 years. That would mean our children and grandchildren would require nearly 400,000 new homes, among other accommodations for growth.

Is anybody planning for this change? And can any citizen or homeowner have a voice in how to manage this predicted growth?

Through November, San Diegans will be able to weigh in on the area’s biggest planning initiative ever. “Our Greater San Diego Vision” is an ambitious civic engagement process supported by the nonprofit San Diego Foundation.

“Tens of thousands of people are engaged in this project,” says Our Greater San Diego Vision chair Bill Geppert, current president and CEO of the Economic Development Corporation and former head of Cox Communications in San Diego.

“This effort aims to inspire and engage a broad cross-section of the community with a long-scale vision,” he says.

Geppert notes that the effort began earlier this year and proceeded to attract more than 150 diverse “ambassadors” who have four task forces on infrastructure, education, job opportunities and cultural amenities.

In the fall, the job of the task forces was to brainstorm future options. In November, those options will be put before the general population, giving people a chance to rank the issues they feel are most dire.

The goal of a new Center for Civic Engagement within the San Diego Foundation is to maintain awareness of the survey results. The Our Greater San Diego Vision team will not become political lobbyists, but will aim to get the study input into the hands of the appropriate advocates and politicians.

Geppert says this initiative should interest local homeowners because of the investment they’ve already made in their communities. “They have a passion for San Diego,” he says. “They want to raise their kids here and make sure it will have the amenities that make this such a special place.”

Anyone who wants to participate or vote can go to ShowYourLoveSD.org (through November 25). The initiative is also active on social media outlets like Twitter and Facebook.