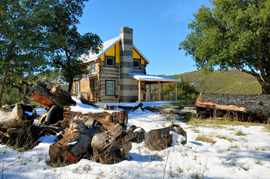 December 3, 2011 – IT’S BEEN SAID — AND MOSTLY SUNG — that Frosty the Snowman was “a jolly, happy soul.” Being comprised of the cold, white, frozen stuff might make one predisposed to snow. But as it stands, my flesh is human. Snow makes me cold and grumpy.

Years ago, I bade goodbye to East Coast climes better known for Frosty’s DNA. Unlike so many San Diegans — who don’t know a good thing when it’s registered at 72 degrees on their backyard thermometers — you won’t see me trampling out to East County when fallen powder paints the green hills and valleys.

Granted, the views are Rockwellian. Gaze longingly (above) at the picturesque Julian cabin belonging to design super couple Gordon Carrier and Robin Wilson Carrier. We specifically dispatched staff photographer Martin Mann to get that shot — and the resultant photo is inspiring.

The backstory, however, illustrates why I harbor lingering ill feelings toward Frosty fodder.

Time it took Mann to shoot the cabin: approximately 15 minutes. Time it took to get him home after getting stuck in the snow: 8 hours.

It was early 2011, recalls our photographic protagonist. There’d been a major snowfall, and if we were going to have winter images for this December issue, it was time to act.

Mann’s all-wheel-drive Ford Edge was getting a tune-up. So he rented a Ford Fiesta and set out for East County. His assigned setting was actually seven miles outside Julian proper (with nary a 7-Eleven in sight). Our Mann parked, hiked in and did his job, then secured his gear for a drive back to the office.

Not so fast. The wheels of the yellow Fiesta spun but got no traction in the muddy ground. He was stuck.

Nobody was home at the Carrier cabin. Mann’s blackberry was getting spotty service. The surrounding snow-scape was pretty, but there was no visible civilization (not even a Starbucks!) to engage.

He finally got through to Triple-A. They promised prompt service … Five hours later, a flatbed truck showed up.

The truck, too, quickly became dug in, and was unable to make the assist.

After a few more agonizing hours, a pair of sheriff’s department SUVs rumbled onto the scene. The deputies produced metal tow winches and pulled free the flatbed truck and Mann’s rental.

In the end, we’re most appreciative to the Carriers for giving us access to their gorgeous, woodland escape.

And, major kudos go to our unflappable photog. Mann has been a professional shooter for 30 years, and I asked him if he’d ever been in a similar situation.

He paused. Effusive and personable, Mann doesn’t pause very often. “I can laugh about it now,” he says. “Sure, it was frustrating. But you just have to laugh.”

Yes, that’s what jolly old Frosty would have done.