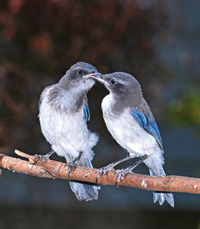 Western scrub-jays (Aphelocoma californica) are non-migratory birds, easy to identify with their dominantly deep-azure-blue plumage. Males and females are similarly marked. They form close family ties, foraging in pairs or family groups. The species feed on insects and fruit during spring, switching to nuts and seeds later in the year. They also are keenly aware of where other birds store their food (including other scrub-jays) and may steal the goods and secretly hide them. Well known for their mischievous behavior, they have developed a bit of a notorious reputation among the bird kingdom. Still, they are unique among animal intelligence, with a brain-to-body mass ratio, rivaling that of chimpanzees, and dwarfed only by humans. They can easily be lured to backyard gardens that offer their favorite foods: peanuts in the shell and sunflowers seeds. A patient homeowner can coax them into being hand fed.