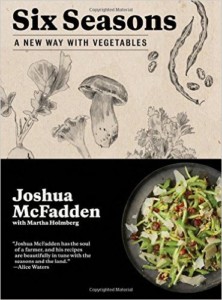 The Good Earth / Great Chef Series presents Joshua McFadden at the Chino Farm with his new cookbook, Six Seasons: A New Way With Vegetables. “McFadden shows how seasonal produce can be downright thrilling…. Divided into six seasons rather than the traditional four—a more accurate reflection of what’s happening in the fields—the book encourages readers to embrace what he calls ‘the joyful ride of eating with the seasons…” — Sunset Magazine

The event is FREE

Food lovers love Portland, and Portland loves Joshua McFadden, a chef with the soul of a farmer and the palate of a visionary. We are delighted to welcome Joshua for a book-signing event to celebrate his debut book, Six Seasons: A New Way with Vegetables and the arrival of our own summer season at the Chino Farm. We invite the San Diego food community to join us for an exciting morning with the author, complete with music, drinks, and small bites inspired by the book.

Joshua McFadden, chef and owner of renowned trattoria Ava Gene’s in Portland, Oregon, is a vegetable whisperer. After years racking up culinary cred at New York City restaurants like Lupa, Momofuku, and Blue Hill, he managed the trailblazing Four Season Farm in coastal Maine, where he developed an appreciation for every part of the plant and learned to coax the best from vegetables at each stage of their lives.