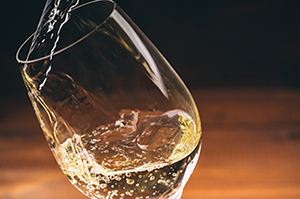 I am not a saver. I consistently “trash” emails, erase voicemails, purge files, toss papers and otherwise maintain a tidy environment. But I did keep the two-sided menu card from San Diego County Vintners Association’s 2013 Wine & Food Festival. At that time, the association had 39 members; it now has 63 — stretching as far north as Rainbow and as far south as Otay Mesa.

I had lived in San Diego less than five months when I attended the 2013 event and began learning about the local winemaking scene. Since then, I have explored the region’s viticulture and even helped plant vineyards on residential properties as one of Greg Maness’ volunteer crew. Greg has been a consultant for people who want to get into grape growing and last year opened a tasting room at his own Jamul vineyards: Casi Cielo Farm Wines.

On April 30, Maness Vineyards and Casi Cielo Farm Wines will be among 21 SDCVA members presenting the fruits of their labors at the 2017 Wine & Food Festival.

Reviewing the 2013 menu card, I note that I had the opportunity to try not only traditional, beloved varietals, but also the unusual: a Mourvedre/Primitivo blend from Old Coach Vineyards, a Nebbiolo/Sangiovese blend from Coyote Oaks Vineyards, a Tempranillo/Grenache blend from Witch Creek Winery, an Arneis from La Serenissima Winery, and a passion fruit and habañero wine from San Pasqual Winery.

Notes that I took while visiting with the winemakers indicate that Blue-Merle Winery made a blend of Grenache, Tempranillo, Petite Sirah and Carignane, called “Four Friends,” and Coyote Oak made a Nebbiolo/Sangiovese blend called “Sneaky Dog.”

One of the primary aspects of wine festivals that I love is the opportunity to try wines that I probably won’t happen across in a store — or be too wary of buying because I’m not sure I would appreciate a blend of two or more grape varieties that go beyond, say, the classics of Cabernet Sauvignon and Merlot or Grenache and Syrah or Marsanne and Rousanne (all of which, by the way, were options at the 2013 festival).

A particular benefit of attending this year’s festival will be learning about wineries that are emerging in the local scene. Some don’t have tasting rooms (or at least tasting rooms with regular hours of operation), while others require a long drive to visit (a point not missed by John York in naming his Ramona winery Hellanback Ranch & Vineyard). A gathering of such under-the-radar vintners in one spot at the same time represents good fortune to those who enjoy discovering “new” wines.

After doing a bit of online, pre-festival research, I harbor hopes that Principe di Tricase Winery in Ramona will be pouring its Aleatico and sulfite-free Aglianico and that Hungry Hawk Vineyards and Winery of Escondido will bring its estate Albarino. That only gets me through the As. If I am lucky, at least one of the participating winemakers will bring a Zinfandel, which will allow me to sip my way through the alphabet.