A whisper of alcohol lifts chocolates and cupcakes to premium status

We love heart-shaped boxes of chocolates, especially paired with a dozen long-stemmed red roses. But sometimes traditions need a boost. When Valentine’s Day rolls around, elevate your expression of adoration with alcohol-tinged sweets.Local chocolatiers put zing in truffles and bonbons with a variety of liquors and liqueurs. South Park’s Eclipse Chocolate makes truffles in Champagne, Champagne and cherry, basil/absinthe, and banana/cigar leaf/rum versions. Chuao Chocolatier in Carmel Valley offers dark-chocolate bonbons in these combinations: chocolate margarita with tequila, spice Cabernet caramel, mocha with rum and goat cheese, and pear with St. George spiced pear liqueur. Godiva Chocolatier in Mission Valley sells truffles with Grand Marnier, Champagne and rum. Gaslamp District’s Chocolat Cremerie also makes Champagne truffles, as well as chocolates with Cointreau. Chocolate Haus in Pacific Beach uses Grand Marnier in a blended ganache that includes orange zest and dark chocolate inside a dark-chocolate shell. Another version uses a Kahlua and Illy Italian espresso ganache covered in dark chocolate with a coffee bean on top. Chi Chocolat in Point Loma makes truffles with amaretto and bonbons with bourbon and tequila. The Elegant Truffle, also in Point Loma, makes Champagne, cognac, Grand Marnier and rum truffles. As hotel ads for intimate couples packages are known to suggest, chocolate-covered strawberries possess a sensual quality that makes them a signature luxury for lovers. Leilani Kaloha, owner of Intoxicated Desserts, ups the ante by offering tube-shots with jumbo berries. To break further from the mold, a Valentine’s Day gift-giver could order Intoxicated Desserts’ specialty: “cocktail cupcakes” (sold only to those 21 and older). “A lot of people bake alcohol into a dessert, but most of it burns off, so you are just getting the flavor and not the essence of the alcohol,” says Leilani, who imbues her cakes with alcohol in the icing or batter or brushed on the cake, but mostly through “tube-shots” that inject liquid into a cake just before consumption. She doesn’t “pre-inject” the alcohol, she explains, because it would make the cake too soggy. “The cake is like a sponge. I tell customers to squirt a little at a time,” Leilani says. “Some people just shoot the tube in their mouth and then eat the cupcake.” 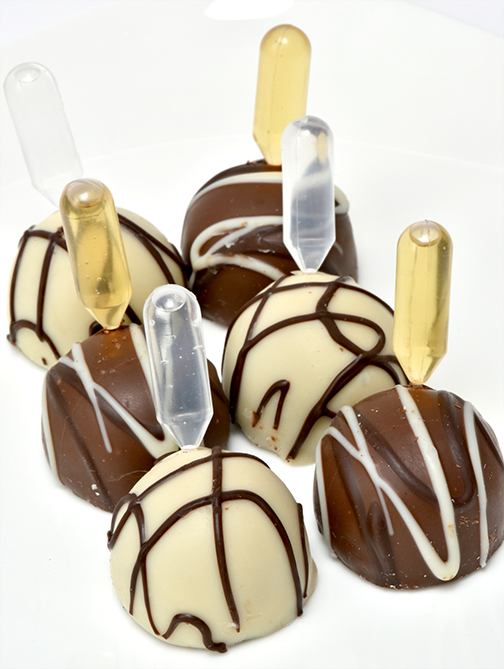 Intoxicated Desserts, which does not operate from a storefront but only by special order, offers a long list of flavor combinations. The most popular, Leilani says, are Oreo Mudslide with a tube-shot of Irish cream and Kahlua; Lemondrop with a tube-shot of limoncello; Strawberry Margarita with a tube-shot of silver tequila and strawberry mix; and Cherry Jack Daniels with a tube-shot of Jack Daniel’s whiskey. Other alcohols that Leilani uses include Malibu rum, Blue Curaçao, Southern Comfort, Karl Strauss Brewing Co.’s Red T rolley Ale and Coronado Brewing Co.’s Orange Ave. Wit beer. Because she relies on “top-shelf” alcohols for the best results, Leilani makes her own infused vodkas, including those flavored with cotton candy and bubble gum. For the latter, she adds 30 pieces of bubble gum to a bottle of vodka until the gum disintegrates. “I bought flavored brands, but they were too strong,” she says. “I also make my own chocolate vodka. Mine has more chocolate, which makes it smoother.” The alcohols she won’t use are really strong ones, like high-proof Everclear. In addition to cupcakes, Leilani makes chocolate-covered cake balls complemented by tube-shots.  She has bestowed provocative names upon several of her cocktail cupcakes. So, although your “one true love” may enjoy a chocolate cake filled with Bavarian cream topped with banana frosting and accompanied by a tube-shot of coconut rum/Irish cream, we can’t recommend you reveal that it’s called Ménage à Trois.