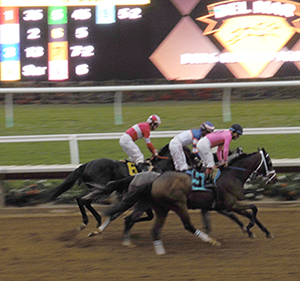 In business, especially in terms of management, everyone touts the importance of having a strategy and “strategic alliances.” In sports, a head coach, especially at collegiate and major league levels, without a strategy won’t last a season, if that. Most games, especially those for ages 6 and older, involve strategy, especially Go and Chess.

When I have to run errands, I have a strategy for the order in which I hit my destinations based on the most efficient route combined with the possibility that I will be picking up something that needs to be kept frozen.

The first time I went to the San Diego Bay Wine + Food Festival, I strategized over a layout showing the locations of various wineries, restaurants and exhibitors. I quickly discovered a fallacy in my thinking: It did not allow for other people. That is, when I came upon a winery of predetermined interest to me, if there was a group of other festival-goers crowded there, I would decide to circle back. That’s not a big deal, but it did mean that I had to make a notation next to the Hi-Liter Yellow indicator on the layout.

I also soon realized that having a very focused plan curtailed the serendipitous joy of discovery. I tucked the layout away. It was a good reference source, but not something one should consider a strategic tool.

I’ve long been an avid planner, even though I’ve found that over-planning things, especially vacations, makes it difficult to “go with the flow” when things happen beyond one’s control (e.g., a delayed flight) and when you see something you’d like to enjoy but it doesn’t fit “the plan.”

So it took me a few more tries at the San Diego Wine + Food Festival to get it right, which I did last weekend. I walked through the “gate” with no intentions other than to absorb what I could. And, whatdayaknow if having an “unstrategy” wasn’t the best strategy of all. I enjoyed many wines and conversations with winemakers that weren’t “on my radar.”

The following day, I went to the Del Mar Racetrack for the Bing Crosby Season. On the way in, my friend asked if we needed a Daily Racing Form. I know that would be a good strategy for picking potential winners if one were inclined to read it (e.g., a person who plans to bet more per race than the nominal amounts I am willing to wager).

Although I do not frequent the races, I have gone occasionally and found that even a $2 bet on a horse to show gives me the sense that I personally have something at stake and a definitive reason for cheering on a horse and jockey. It’s all I need to feel the thrill (though I’d love it if someone would give me a bunch of money to put on the line with no obligation that I pay him or her back).

My “strategy” for picking a “winner” starts with the horses’ names. I was a fan of I’ll Have Another even before laying eyes on the thoroughbred in the Kentucky Derby of 2012. Despite 15-1 odds, I’ll Have Another was “my horse.” He went on to win the Preakness, and I’m sure he’d have won the Triple Crown had he not been injured when the Belmont Stakes came around.

In any event, my “strategy” is to first see if a name strikes me. Then I look at the odds and who the jockey is. If I’m really undecided, I look at how much the jockey weighs, knowing that the less weight I have to carry, the faster I can run.

When the weather turned cool between the seventh and eighth races, my friend and I decided the eighth race would be our last for the day. We both bet on Solid Wager. After all, what more prophetic name could a racehorse have? And whatdayaknow if the 5-year-old and jockey Victor Espinoza didn’t win the $100,000 Cary Grant Stakes (see above photo).

Although I didn’t come out ahead for the day, I felt satisfied collecting my winnings from the eighth race. And that’s why I followed an especially sensible final strategy: “Go home a winner.”