A Man of Distinction 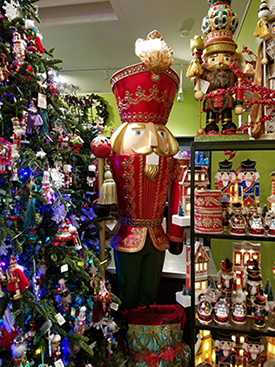 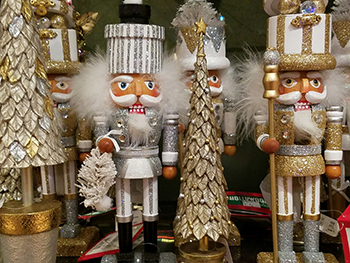 It’s not every day that you see a 7-foot nutcracker. In fact, the very thought is a bit frightening. But this time of year, the figure that inspired Tchaikovsky to write a ballet can be found in abundance — perhaps never more so than at Adelaide’s in La Jolla.

This year, the flower and décor shop that goes all out when holidays roll around, has given over quite a bit of floor, shelf and Christmas tree branch space to nutcrackers — ranging in size from 3 inches to the aforementioned 7-footer (shown above).

“From a design standpoint, I love the representation of nutcrackers, the whimsicalness of them, and I think they are a great nonreligious twist on holiday décor that everybody can appreciate,” says Adelaide’s co-owner and Creative Director Larry Anhorn.

In addition to those in red, black, gold and green, this year’s bounty comes in jewel tones and bright colors like nontraditional lime green, hot pink, chartreuse and blue. Glittery guys look fabulous in silver and white with black boots or gold and white with silver boots — both wearing “soldier hats” that resemble Christmas presents (see above).

Larry has more than a designer’s affinity for nutcrackers: He was a ballet dancer in the Pacific Northwest and then with San Diego’s California Ballet Company. He performed in Tchaikovsky’s The Nutcracker in multiple roles over the years, including the harlequin doll, snow king and Drosselmeyer’s nephew.

“And I have done every character dance in Act II, which depicts spices and candy,” he says.

One needn’t be enamored of arabesques, pirouettes and jetés to appreciate the nutcracker. Before it was a ballet staple, it was a popular gift of good luck in German households. When Larry began sourcing nutcrackers for the 2016 holiday season, he was amazed by the diversity of styles in everything from ornaments to statuaries.

“They would complement any type of interior décor, from ultra-traditional to ultra-modern,” he says.

If you are going nutcracker shopping, you couldn’t pick a finer day to do so than this coming Sunday (Nov. 20), when Adelaide’s is participating with other merchants along the 7700 and 7800 blocks of Girard Avenue for a collective Holiday Open House from 10 a.m. to 4 p.m. Expect to find lots of drink and food treats (including lots of cookies), drawings, Toys for Tots collections, giveaways and prize drawings, carolers and other live music, elves and fairies from California Ballet Company — and, of course, Santa (10:30 a.m.-noon at Geppetto’s and 1:30-3 p.m. at Adelaide’s).

As for Tchaikovsky’s holiday classic, the ballet company will perform The Nutcracker Dec. 10-11 and 16-24 with San Diego Symphony at Civic Theatre.

Addendum for World Series fans: There are Chicago Cubs and Cincinnati Reds nutcrackers on the market, but Larry points out that Adelaide’s purchases its inventory for December in January, well before baseball season’s finale. So locals who follow those teams will have to get those online. But if you want a snow globe, a hot pink nutcracker or a nutcracker that won’t be dwarfed by a Christmas tree, you need to go to Adelaide’s.