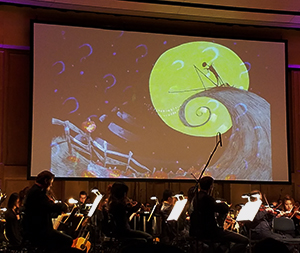 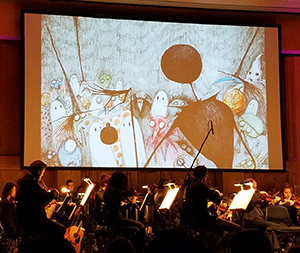 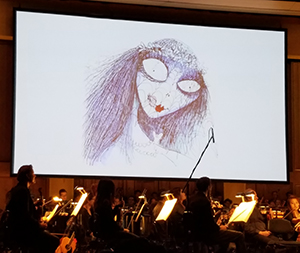 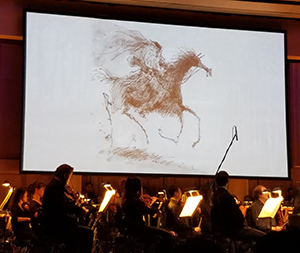 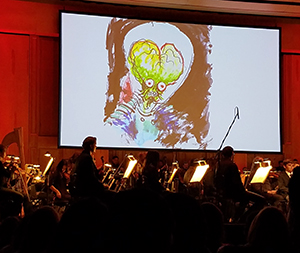 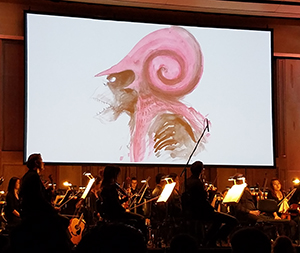 If not for the fact that it was The Saturday Night Before Halloween, I might have been taken aback seeing Edward Scissorhands in line for a cocktail at Copley Symphony Hall.

And although I have a bone to pick with filmmaker Tim Burton for omitting the “s” between “Scissor” and “hands,” it was a fitting costume for an attendee at San Diego Symphony’s program titled Danny Elfman’s Music From the Films of Tim Burton.

With the unmistakable sound of a theramin (or did the symphony find a way to coax an instrument to sound exactly like a theramin?) beginning the concert, it was obvious this was an unusual night — apropos of the vision of the producer/director of offbeat movies like Pee-Wee’s Big Adventure, Beetlejuice and The Nightmare Before Christmas. In fact, I imagine that visiting conductor Scott Dunn (LA Philharmonic’s Hollywood Bowl Orchestra associate conductor) may have been delighted to discover that the audience was probably not your typical symphony crowd.

I base that assumption on two things: (1) Even before each composition began, when the title of a Tim Burton film was projected on large screens (a huge one directly behind the orchestra and large ones on either side of the stage), applause erupted. (2) After four years in San Diego, this was my own first date with the San Diego Symphony, spurred by my appreciation for the weird and wonderful world of Tim Burton. I am sure that I was not alone in that regard. Indeed, an acquaintance I ran into during intermission stated that he was not a regular symphony-goer, but was a fan of the Corpse Bride creator.

As the first notes of each movie score were played, Burton’s sketches appeared on the screens. The promise of this audiovisual experience was part of the draw, so to speak, of the concert (especially for an art lover like me). Movie-goers have seen Burton’s sketches in his animated films, but the concert included sketches for his live-actor movies as well: Charlie and the Chocolate Factory, Big Fish, Batman, the aforementioned Edward Scissorhands, et al. Clips from both live and animated films also were projected on the screens.

I learned several interesting facts about the composer from the symphony program, perhaps the most amazing one being that Elfman was 18 years old before he picked up his first musical instrument (violin), that he composed The Simpsons theme, and that he was a founder of and writer/singer for Oingo Boingo, whose hits included “Weird Science” and “Dead Man’s Party.” Visual art for three of the band’s albums (Dead Man’s Party, Skeletons in the Closet and Boingo Alive) feature skeletons, so it seems the subsequent Burton-Elfman collaboration was predestined.

Speaking of skeletons, if I may segue/backtrack to my daytime adventure, I went to Old Town without realizing until I was there that the Latin American-infused destination was celebrating Dia de los Muertos. Skulls and skeletons were visible everywhere. Day of the Dead flamingos even snuck into a flock at the Urban Seed garden shop (see picture below).

At the symphony, it struck me that the concert was all the more in tune with my day, given Burton’s frequent use of skeleton-inspired characters, not the least of which is Jack Skellington in The Nightmare Before Christmas.

I can conclude that Saturday was ideal for a pre-Halloween weekend, but I can’t start that conclusion with “No bones about it, ….” 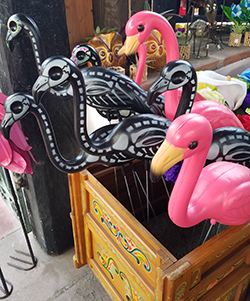