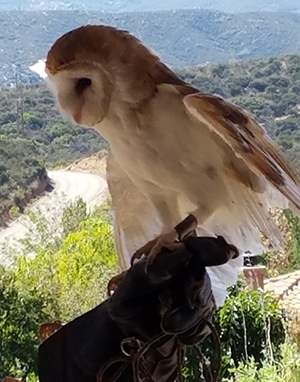 From my apartment balcony, I watch the hunters in the sky and my thoughts turn to, “Hide, bunnies!” In the predawn hours when I’m making my way from my apartment to the fitness center, I see the cotton-tailed animals scampering back to their natural habitat. So I know they are there, as do the raptors circling the canyon slope in the daylight hours. I’m sure the birds are looking for rodents and reptiles as well, but I’ve only seen bunny rabbits — and they’re so cute.

My general opinion about birds is, unfortunately, shaped by Hitchcock’s The Birds (which I first saw at an impressionable age) and the constant need to remove foreign substances from the exterior of my car.

My primary context for rabbits is an animated trio: Peter, the hippity-hoppity harbinger of Easter; the carrot-chomping Bugs, a good-natured prankster; and Bambi’s teacher and friend, Thumper. It seems that bunnies/rabbits/hares consistently are lovably quirky. In Wonderland, there’s the late-for-an-important-date White Rabbit and always-tea-time March Hare. Even rabbits involved in commerce (Nesquik chocolate milk, Trix cereal and Energizer batteries) possess special charms.

I was led to course-correct my generalization that rabbits are only meant to amuse, however, when I attended a gathering of the San Diego County Garden Guild at one member’s home.

In the back yard, I was shown raised beds for a range of vegetables and herbs — enclosed in chicken wire to protect them from marauding rabbits (and other wildlife, but rabbits were singled out by name). I also heard about the devastation of a colorful swath of crocuses at the hands (or, I guess, teeth) — of the hunting herbivores.

And when the homeowner gave a brief presentation about the development of her gardens, she related that she learned what to plant by discovering which flora the rabbits snubbed their little pink noses at and which flora they devoured (without remorse, one was led to assume at this point).

My position on raptors also got some adjusting at this gathering presented by the guild’s habitat gardens group, which had arranged for a special guest: Nancy Conney, director of Sky Hunters, a raptor education and rehabilitation nonprofit based in Lakeside.

Nancy brought three carriers with her. From the first, she withdrew an American kestrel, which she identified as the smallest species of falcon. She explained that this particular bird had started its life in captivity before being brought to Sky Hunters and could not be returned to the wild.

“If I let him go, he would fly well enough,” she said. “But he would fly to a tree and wait there for someone to feed him.”

Nancy exhibited her wit when she told the gathering that raptors mate for life but only get together once a year (“See you same time, same place, next year”). “We should take a lesson,” she suggested.

From the second carrier, Nancy removed a small screech owl whose eyes practically consumed his face. As he sat perched on her gloved hand, she told us that he could turn his head 270 degrees. She explained that a screech owl has 14 bones in its neck, whereas humans have seven. She further stated that screech owls don’t, in fact — that is, they don’t screech. She characterized their voice as resembling the sound made by a bouncing ball.

The third carrier held the largest of the day’s visiting raptors: a barn owl (shown above). This one had fallen out of a palm tree. His appearance was a feathery false perception in that he only weighed one pound. To illustrate the illusion, Nancy encircled his neck with her thumb and finger without him gasping for air, let alone even slightly squirming.

Nancy further informed us that barn owls have hollow bones. “If we had bones like them, we could fly; but we don’t, so we should never try,” she jested (actually, I’m pretty sure she was serious that we should never try to fly, but stating the obvious is the joke). Then she said that barn owls are able to “close” their ears if they want to “because they have noisy babies.”

Amid all her humor, Nancy was serious when she talked about what people should do when they find a sick, injured or abandoned raptor: use a towel or blanket to lift them into a cardboard box with air holes, cover or close the box and contact a rehabilitation group like Sky Hunters. She also commented on the error people often make in feeding injured birds bread and milk. “Where do you find bread and milk in nature?” she posited.

I left better informed and perhaps with a less-biased opinion about rabbits and raptors.

Postscript: Look for a feature on the Alpine garden in the March issue of San Diego Home/Garden Lifestyles magazine. Meanwhile, check out the photo below taken at the guild’s gathering. In particular, note the acorns and the pomegranates that came from the property. 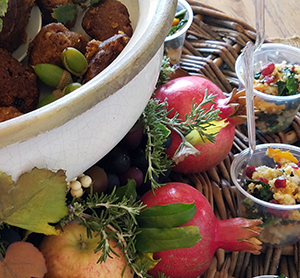