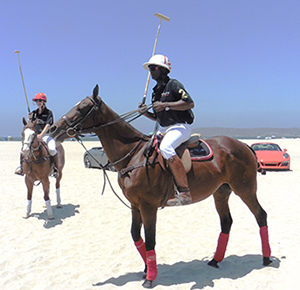 Polo players Jessica Bailey and Domingo Questel,
with horses and Porsches, on the beach

Though I still recall the pain of having my arm run over by a golf cart, I was nevertheless enticed by the opportunity to put myself into a somewhat related sporting challenge.

The earlier incident arose when I participated in Media Day golf cart polo at the equestrian polo fields in Indio. Extending my right arm as far as it would go to strike the ball with my mallet put one of my favorite limbs perilously close to the ground. It did not, of course, occur to me that its proximity to the playing field was problematic until it was struck by the tire of another player’s cart. Fortunately, the result was merely bleeding and bruising and not broken bones.

When I was invited to try beach polo during a Media Day event at Hotel del Coronado this week, I felt confident that the height of the horse would preclude the potential for having my arm trampled on the sand. In fact, I signed the waiver form without reading it.

More the point is the fact that this was not a “game” situation. There were two very sedate horses (we were informed they were polo training horses, which obviously implies they were not going to run amok like some crazy golf cart driver). Furthermore, the two polo players accompanying them never left our sides, even though we were given helmets to wear (perhaps it was just a fashion statement, but probably not enough of one without jodhpurs tucked into boots).

My right arm did, however, come into play, as it were. I have exceptionally long limbs; therefore, I think I needed a shorter mallet or a taller horse, because the mallet hit the sand before it could make contact with the ball. It didn’t help that beach sand doesn’t care to lie flat, especially when it’s been trod on. And the ball nestled into the grainy pockets instead of resting cooperatively atop any peaks.

I did manage to get one decent swing in before dismounting and finding my way to the Hotel del’s beautiful refreshment table for a victory sip of champagne.

If hotel guests and locals enjoying the beautiful day thought the sight of polo horses on the beach were odd, they also must have been taken aback by the pair of Porsches parked on the sand.

The unusual combination just hints at what is to come on Labor Day weekend: a joint presentation of Polo America and Hotel del Coronado of a two-day extravaganza of cultured lifestyle to benefit the Genomics Institute at Rady Children’s Hospital.

A 50-by-200-foot tent will be installed on the beach for polo spectators — the Millionaire’s Row of which will be outfitted with white leather couches and chairs. Polo games will be played at noon and 2 p.m. on Saturday and Sunday. The only thing that will be missing is the traditional divot stomp to the crooning of Roy Orbison singing “Pretty Woman.” (Trying to patch horse prints in the sand, as one can imagine, would be an exercise in futility.)

Other events include runway shows with fashions from Grayse (a company formed by St. John Knits’ Kelly and Marie Gray) and Ermernegildo Zegna (the Italian label for luxury menswear); luncheons, including a clambake; polo and tango lessons (with the polo players); and a Porsche Million Dollar Road Rally.

Silver Seas Yachts will be bringing two boats from its Shelter Island marina to the bayside for the rally. As if driving a 2017 Porsche isn’t enough of a thrill, participants will be boarding a yacht, moving it out of its slip, giving it two 360-degree turns (whee!) and “reslipping” it.

According to Polo America founder Randy Russell, NBC Sports will be filming the polo matches for a Dec. 10 broadcast at 3 p.m.

With all the fundraisers that take place in San Diego County, it’s especially exciting to have a new event that is unlike any other. For more information, visit poloamerica.com.