For the Art of Love 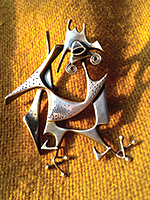 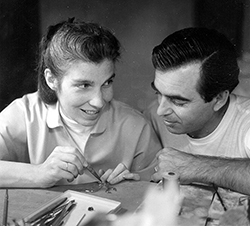 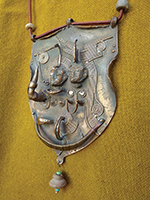 When I was searching for something to do after a luncheon in Oceanside over the weekend, someone suggested I view the jewelry exhibit at Oceanside Museum of Art.

At first, I pooh-poohed the idea. About the only jewelry I wear with any consistency is a wristwatch, and that’s for practical reasons (I still can’t get used to the idea that my phone has rendered my watch obsolete). On occasion, I’ve decorated myself with clip earrings (my lobes are too thin to keep holes whole), but usually the pain just isn’t worth the beautification effort.

Eventually, though, the title of the exhibition, Love Letters in Metal: Jewelry by Svetozar and Ruth Radakovich, piqued my interest. I know the unusual, exquisitely sculptured jewelry forged by these prolific artists who worked in many genres and were lauded worldwide should have intrigued me. Instead, what fascinated me more was the couple’s fairy-tale romance — an epic that belongs on a Hollywood movie reel.

World War II had just ended. Ruth, as an American liberal activist volunteer for the United Nations Relief and Rehabilitation Administration, was sent to Belgrade, Yugoslavia, where she met Svetozar (Toza) who worked as a UNRRA graphic artist. Art must have been their form of communication because, despite the language barrier, they fell in love. In 1947, when the UNRRA disbanded, Ruth was forced to leave the country. Toza, on the other hand, was not permitted to leave.

Hidden love notes made their way through the Iron Curtain. Four years later, Yugoslavia opened its borders to tourists. Ruth rushed back to see her long-lost love and, against Toza’s protestations, visit the Ministry of Interior to plea for his exit visa. I guess their love story didn’t impress the Ministry of Interior as much as it impressed me. Just for asking, Ruth was slapped with a deportation order. And Toza was arrested and imprisoned for associating with a foreigner.

Eventually Toza was released, which is when Ruth began mailing him CARE packages. Always the humanitarian, she was sending him aid: each parcel contained a few small boat pieces. In time, he assembled a complete vessel and set course for Italy, where she was waiting. Unfortunately, the plan was foiled when, on the night that Toza was rowing his way to freedom, the crew on a Yugoslav Navy patrol boat spotted him. Instead of landing in Italy, he landed back in prison.

Upon Toza’s release, he went to work for Jugoslavia magazine. A short time later, for some inexplicable reason, he was granted a work visa to Paris. Ruth met him immediately, but it took two years of paperwork before they officially could marry. In 1955, they came by ship to America. In 1958, they moved to Encinitas and settled there.

If you want the complete rundown, a documentary film produced by the couple’s daughter, Jean, is being shown in conjunction with the exhibit, which runs until Aug. 7. From 10:30 to noon on July 13, also at OMA, Jean will present a lecture discussing her parents’ love story and their art. For more information, visit oma-online.org.