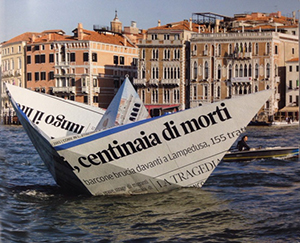 Though I have recurring nightmares related to leaky roofs (with water-soaked walls “melting” around me) and very little tolerance for submerging my body in frigid surf (have at it, San Diegans), I am, nevertheless, a Pisces.

I love movies about high-seas adventures (typically involving a mutiny) and nonfiction books about oceanic expeditions (typically involving a shipwreck). And, like so many people (even non-Pisceans), I have harbored romantic notions about life aboard a seaworthy vessel. In fact, I once had building plans for a 51-foot sailboat; for a while, the purchased drawings were tacked on a hallway wall like artwork.

So it is not surprising that I would be drawn to the newly released Radical Seafaring (DelMonico Books · Prestel, 2016). The elegantly silver-covered coffee-table book, which documents a current exhibition at Parrish Art Museum in Water Mill, N.Y., belies the mostly rugged and ragged nature of the projects showcased, but fits the dreamers’ enchantment.

Radical Seafaring introduces the reader to conceptual artists from around the world who have — whether individually, in collaboration with someone else or as collectives — explored architecture, made cultural and political statements, and expressed quixotic notions without the limitations of terra firma.

The first half of the book provides an overview and categorizes the reasons people leave land as exploration, liberation, fieldwork and speculation (e.g., seasteading and floating cities). The second half of the book profiles specific artist projects. Here are my favorites:

Brazilian-born Vik Muniz made an origami-esque, 43-foot boat out of waterproofed paper around a wooden framework (above photo from the book). The Lampedusa traversed Venice’s lagoon alongside yachts, water taxis and gondolas, reprinting a front-page article in the local newspaper on the capsizing of a boat carrying migrants.

In a performance piece titled Autoxylopyrocycloboros, England-born Simon Starling set off with a friend in a 20-foot wooden steamboat on Scotland’s Loch Long. While he piloted the craft, his friend sawed up the boat, feeding it bit by bit into the firebox. The journey lasted four hours.

The exhibition at Parrish Art Museum runs through July 24. The book is available for online purchase from Amazon and Barnes & Noble.