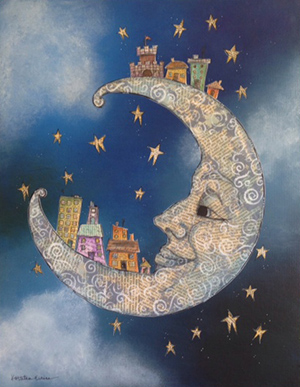 After mostly gray May days, I jumped at the opportunity to spend a Saturday outside when the sun finally proved that it had not, as I was beginning to suspect, been expelled from the Milky Way. I considered hiking, but my calendar informed me that Art Around Adams was taking place from noon ’til night.

I wanted to catch the movie in the park (Disney’s Inside Out), so I waited to make my arrival at 2 p.m., even at that wondering if I was allotting too many hours that would leave a gap of “time to kill” between perusing the avenue’s attractions and the computer-animated film.

After parking my car a couple of blocks south of Adams Avenue, I walked to the information booth and picked up the “program,” which included a map and schedule of performances on a series of stages.

The map called out 92 businesses stretching from Hamilton to Biona streets, 22 of which were designated as stops to get your map stamped (stamped maps could be turned in for gift certificates and prizes).

A majority of the venues were showcasing art, inside and/or on the sidewalk, and some were hosting live entertainment.

You cannot drive down a street so slowly that you catch every eatery, coffee or juice shop, gallery, retail store, yoga studio, salon or other business. (If you can, please stay off the roads when I’m driving.) But when you travel by foot, you can stroll and stop at your leisure. And that’s how you discover places and meet people — like I did during Art on Adams.

One of my favorite finds was Adams Avenue Book Store. It’s the real deal — the kind of place that feels as comfortable as a house, with wood shelves and a staircase that leads to more books. It even has two resident cats wandering around like they own the place (which, in a way, they do, since they belong to bookstore owner Brian Lucas). Upstairs, I perused the philosophy section and was impressed that there were more than two shelves devoted to books by Kierkegaard. I could have spent the rest of the day in the bookstore, but that would have defeated my goal to enjoy blue skies, fresh air and warm temperatures.

Another spot that has a neighborhood, nostalgic feel is Kensington Video, which shares its space with Vidajuice. The operations are separate businesses, but the owners are related. I think this could be a great scenario for a sitcom — maybe even a sitcom that could be collected in a season’s worth of episodes for Kensington Video to rent.

I wasn’t hungry, but I stepped into The Haven to get my map stamped. I grabbed a paper menu and learned that the pizzeria makes pesto with hazelnuts. I vowed to myself to return and try it.

I further vowed to return to Stehly Farms Market, which impressed me with its array of produce, healthy dry goods and the counter where you could buy food to go or eat in (the flatbreads menu in particular caught my eye).

Sophie’s Gallery in Kensington, which sells artworks created by the developmentally disabled clients at St. Madeleine Sophie’s Center, on this day was exhibiting works by San Diego County residents of Iraqi heritage.

Two places with visiting artists that I particularly enjoyed were Ascent Realty, where watercolorist Bella Hollingworth was holding court (and sold several paintings) and Get Fit on Adams, where I first saw Kathleen Elaine’s collaged birdhouses and accessories on the sidewalk and sat down next to her on a bench to chat before stepping inside to see her collaged paintings (above photo).

At Good Vibrations Family Chiropractic, I saw child-sized tables and child-themed rooms and learned that parents sometimes bring in children with ADD or autism. They even work with babies (the attendant said the therapy helps her own baby sleep better).

As I approached DiMille’s Italian restaurant, I thought I heard the surf sounds of Dick Dale. The music was so good and so fun that I had to stop. It was standing room only on the patio and on the sidewalk to enjoy the performance by Alvino & the Dwells. The band even played a surf-guitar version of The Man Who Sold the World (a David Bowie tune revived by Nirvana). I had to stick around for the rest of the set.

Bine & Vine was much quieter, but the craft beer and wine shop does not have a patio, so that wasn’t surprising. I noted that the store carries wines that you typically wouldn’t find in a grocery, big-box or even a typical wine shop. One particularly attractive label caught my eye: the Suertes del Marqués 7 Fuentes. It is from the Canary Islands and is made with grapes that I don’t know (Listan Negro and Tintilla). I’ll definitely go back to buy a bottle when I’m not going to a Disney movie in the park. Owner Geoi (pronounced “Joey”) Bachoua curates the store’s collection with it in mind to offer smaller-production wines.

I wandered into the Villanous Lair, not because I am a comic book/gaming aficionado but just because I like saying “I wandered into the villainous lair” (it sounds better without the capitalization when you aren’t trying to impress someone with your Sheldon Cooperish brain). There were people in a back room playing games and they seemed quite content despite the fact that the sun was not shining on them.

I also would not typically wander into a place with the words “Local Butcher” in the name, seeing as how I am a vegetarian. But the words “Furniture and Design Studio” following “Local Butcher” were a draw. Inside, I sat in a cocoon chair with integrated speakers. The artist/craftsman who made the chair, Aaron Cathcart, told me it was made from old pallets. The smooth finish and hand-carved snake coiling around the chair made that hard to fathom, but he pulled out his smart phone and showed me a photo of the pallets.

I would have sat in that chair much longer had I purchased a book from Adams Avenue Book Store. But the afternoon was coming to a close and I still had to complete what turned out to be a four-mile walk.

When I turned in my stamped map, I received a bottle of flavored water, a pack of stationery and a $25 gift card to DiMille’s — a nice reward for taking the time.

I had planned to head back to Sophie’s for the evening reception to meet the Iraqi artists, but I didn’t have time before the evening movie. Perhaps next year, I’ll schedule my Art on Adams arrival earlier, because there are plenty of great places there to “kill time.”