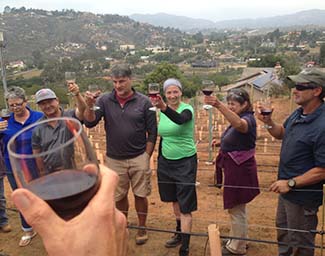 How had I overlooked Donald Trump’s appearance in San Diego last Friday afternoon? More to the point, why had I decided that May 27 would be a fine time to check out Marina Kitchen’s recently launched wine bar in the Marriott Hotel next to the convention center, where the presidential candidate was holding a rally?

When I saw the mass of people on the street and was turned away from the hotel’s parking lot (temporarily for overnight guests only, which I assume meant overnight in the hotel), I almost turned around and headed back to my apartment. But I hated the idea that a political rally could trump my own plans, so I decided to give a parking lot behind the Marriott a try. Multiple Highway Patrol vehicles were assembled there, and that still did not deter me (perhaps the helicopters I saw later would have).

The rally was over by the time I was seated at the wine tasting bar. But I saw a few signs and assumed that many more people in the main bar and dining area had come from the convention center. Based on numerous trays of sliders and fries that passed my way, I am led to believe that those who really like Trump also really like sliders and fries. That’s as far as my political opinions will go here.

I was particularly interested in starting the weekend with wine, because the only scheduled event I had for the 72-hour holiday was going to be on the “front end” of winemaking. Because I enjoy the fruits of someone else’s labor, I figure it’s my way of “giving back.”

And so, at 7:30 a.m. on a Saturday morning with skies that seemed to have decided that gray is the new blue, I hopped in my car and drove to Jamul, where I planted 380 grapevines.

Those with a tendency to quibble would note (and rightfully so) that I didn’t plant all 380 vines by myself. I was part of a volunteer crew of 20 that helped establish the Vertigo Vineyard at Casi Cielo Winery.

I’ve helped plant other local vineyards managed by Maness Vineyards, which owns Casi Cielo. But all of those were on the properties of individual homeowners who were embarking on a “hobby” for the pleasure of themselves, family and friends. This particular plot was a sloped hillside that once had been an avocado grove and now was terraced in an “L” formation for Chardonnay, Viognier, Malvasia Bianca and Albarino grapes.

As always, one of the first orders of business on planting day is to assemble the plastic grow tubes that protect tender young rootstock from danger, including marauding animals — and even from rambunctious vineyard dogs (see below photos of Maximilian and Taylor Swift — it’s easy to figure out which is which). The tubes come in layered rolls, so you first have to separate them. Then you poke your fingers through prepunched tabs, pulling them through their circular openings and spreading them to lock the tube, which then gets stapled on each end.

Thankfully, the trellising system has been put in place and holes dug by professionals. Some volunteers walk along the rows with a bucket of fertilizer and a spade, distributing the growth-encouraging mix onto each pile of displaced soil. Others distribute the grow tubes and the bamboo poles that will keep them upright.

Greg Maness and partner John Keily usually distribute the vines among the holes, though sometimes they give way to volunteer help. I doled out a handful of Albarino on this day.

Next comes the fun: the part of the process during which you put your hands (with gloves) in the dirt. This the volunteers do in pairs. One person positions the rootstock in the hole, while the other mixes the fertilizer with the soil and begins pushing it into the hole. Once the soil has been compacted around the vine, you move to the next hole, repeating the process down one row and up the next (or up one row and down the next, if that’s the way you roll).

Once the plants are in the ground, the tubes are slid over them and the bamboo stakes poked into the soil. Lastly for volunteers is wrapping coils called “pigtails” around the trellis wires where the stakes cross to stabilize the bamboo that stabilizes the tube.

As with the initial vineyard preparation, irrigation dripper installation is left to the professionals. In this instance, Maness Vineyards is experimenting with a new gravity-fed, underground watering system.

The coordinated effort of the volunteers took a little more than three hours. Then we gathered around the pool/patio for wine and lunch.

The grand finale came when Greg and P.J. Maness, John and Lissie Keily, and volunteer planters walked back to the vineyard for the vineyard blessing and toast. Immediately after that, the sun broke finally broke through the gray — surely a fortuitous sign of harvests to come. 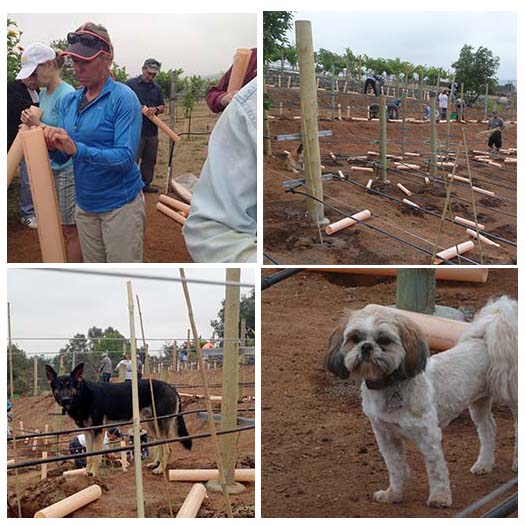