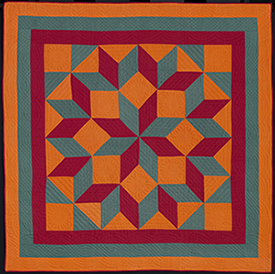 When my sixth-grade classmates were making dresses for their final sewing project, I still was occupied with correctly completing our first assignment of the year: stitching a straight hem on a dishtowel. So when Suzan Peterson, a sewing buff and the person who accompanied me to the San Diego Museum of Art quilt exhibit, said, “This is hard, really hard” while looking at a sunburst-patterned quilt, I figured its difficulty ranked right up there with that of a camel passing through the eye of a needle.

I wasn’t far from wrong. The treasured pieces showcased in Quilts and Color from the Museum of Fine Arts Boston (on view through Sept. 4) were painstakingly hand stitched prior to the 1900s by Amish and Mennonite women, who didn’t have automatic clothes washers or dryers, vacuum cleaners or dishwashers, refrigerators or modern-day ovens. If they were toiling from dawn to dusk, cleaning, cooking and taking care of the children, I wondered when they found the time to piece together these works of art that probably took hundreds of hours to complete. The answer is at night, after they tucked the children in bed. But how they managed the impeccable stitchery — by candlelight — remains a mystery.

The challenge of the work, although fascinating, is not the central theme of the 45 pieces taken from the vast collection amassed by Gerald Roy and the late Paul Pilgrim. Instead, bedazzling color, striking pattern, optical effects and creative variation are the focus.

The Carpenter’s Wheel Quilt (shown above) by Mrs. Miller, a Mennonite from Easton, Pa., is a perfect example of the dizzying color and pattern of the quilts in the exhibit. Others have purple diamonds in green squares or an outpouring of pink, yellow and blue triangles on a green background or florals inside of octagons.

Suzan would probably know each pattern term, from Wedding Ring to Log Cabin (which she says has a staggering amount of variations). All I know is that they are amazing to look at, but I wouldn’t want to sew one — at least not until I finish that dang dishtowel.