Yours for the Ashing 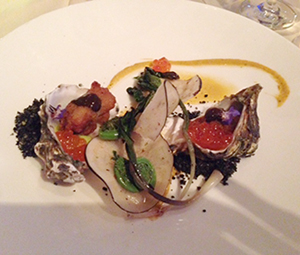 Like all good moms, mine disparaged me from eating dirt. But she never said anything about not eating ash. When I saw the latter listed as an ingredient in a dish at the Berry Good Food Foundation dinner this week, I wondered if the 1500 Ocean kitchen had been harvesting fireplaces.

I’m kidding, of course. Hotel del Coronado would never deign to serve guests anything but fresh, organic and top-quality food. The property even has its own herb garden, which 1500 Ocean Executive Chef Meredith Manee showed the fundraising dinner guests between cocktails and dinner (see photo below).

The ash came in Chef Alex’s oyster beignet (shown above). I was so intrigued by the ash that I called him a couple of days later where he works at San Diego Hilton Bayfront.

The ash, he explained, came from dehydrated spring onions. He was even so kind as to share with me the technique so I can replicate it some day when I am feeling “cheferly” (that’s not a quote from him, by the way).

What he did was to put the spring onion green tops and a little oil into an oven at 200 degrees for about 10 hours — until they look almost charred. You don’t want a charred flavor, though. “There’s a fine line to it,” he said, to which I thought, “No doubt.”

Next, he put the dried onions in a Vitamix to pulverize them. He also added a bit of salt (I asked, because I thought I had tasted a bit of salt). In fact, the ash looked to me like the pink Himalayan salt I use, except not pink. But it didn’t taste like salt in and of itself.

The ash complemented the oyster beignet beautifully, though I can only tackle one culinary master practice at a time, so I will have to find another dish to make with ash on my first attempt. Nevertheless, Alex shared the following information with me.

He made a beer batter with a local IPA and fried the oysters smoked with cherry wood. After they were fried, he “hit them” with sumac and malt vinegar powder.

The other surprise ingredient was fiddlehead fern, which comes out in the spring. Alex explained that it tastes like asparagus, but he used fiddlehead fern because the dinner menu had an ocean theme and he thinks fiddlehead looks like a seahorse.

The other ingredients were ramp, spring pea sabayon and generous scoops of roe.

They were the best oysters I’ve ever eaten — ash and all. 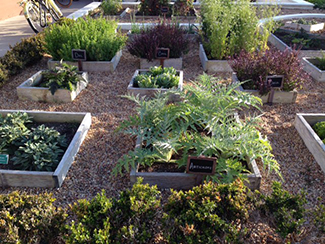