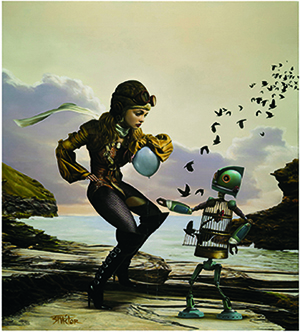 Should I confess that I cheated? I bought one of the paintings shown in the Mission Federal Artwalk program before anyone going to the festival had a chance at it. A friend of mine who knows me well claims I have a propensity to feel guilty even when I shouldn’t, so I won’t this time.

At the artwalk preview reception in January hosted by Westgate Hotel, featured artists for the April 30-May 1 event were in attendance with small exhibitions of their work. I was immediately drawn to paintings by local artist Lynden Saint Victor, who executes what I view as a merging of illusionistic realism and surrealism.

I enjoyed a wonderful conversation with him and then asked him if I could buy the painting titled The Descent of Sophia (shown above).

Upon leaving the reception, I was so excited about my acquisition, which the artist agreed to deliver to me, that I boarded the wrong trolley at the station adjacent to the hotel. It was going the correct way (toward Santa Fe Depot), but switched directions the stop before to head toward the Mexican border.

In any event, The Descent of Sophia now hangs above my fireplace. When I downloaded the artwalk program from artwalksandiego.org, there she was on page 9.

The roster of participants in the program includes two others whose work I own.

I met Cathedral City-based artist Richard Curtner years ago when he exhibited at the Indian Wells Arts Festival. He creates images that are intricate collages of words clipped from magazines. I have three prints of his (a typewriter; a couple in front of the Golden Gate Bridge; and a Magritte-inspired, bowler-hatted everyman with a strawberry face) and bought another (a guitar) for a friend.

At last September’s U.S. Sand Sculpting Challenge on the Embarcadero, I met local artist Norm Daniels. I loved his whimsical, cartoon-style paintings; but the one I walked away with (yes, I paid for it!) is an impressionistic landscape of oak trees.

I can think of few more enjoyable ways to spend a day than walking in fresh air, viewing art and talking to artists, listening to live music and watching dance performances. I see from the artwalk program that this year’s event will include an opportunity for attendees to try their hands at making marbled paper with guidance by a team from Artists & Craftsman Supply (a Hillcrest store where one can easily spend an hour browsing and want to linger longer).

I further see that one of my favorite local performers — Teagan Taylor Band — will be returning to the annual event. It was at an artwalk a few years ago that I first saw Teagan and her band.

The discovery of artists — be they visual or performing artists — is one of the reasons artwalks like this are so wonderful.

Sadly for me, I will be unable to attend the 2016 artwalk in Littly Italy, because I’ll be in little The Netherlands — specifically to catch the final week of the once-in-a-lifetime Hieronymous Bosch exhibition at Noordbrabants Museum. So it’s a good thing I snatched Lynden Saint Victor’s painting when I did. I have not lost one night of sleep worrying about the consequences of my action.