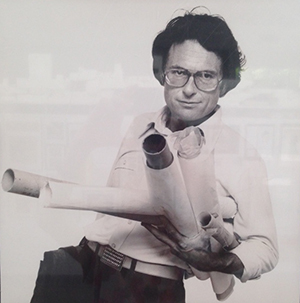 While I occasionally think I missed my calling as a welder or neuroscientist (or, hmmm, perhaps even a welder/neuroscientist), my passion for words guided me onto another path. And one of the major benefits of a career in publishing is meeting fascinating people, including Harry Newman.

I wrote a piece about Harry that was published in the February 2011 issue of Palm Springs Life. He called me out of the blue a couple of weeks ago; and this past weekend, I sat in his Palm Springs house asking him to recount for my accompanying friend stories I’d heard when I was there more than five years ago.

I had started my 2011 article by describing a puzzle that greets you at the entrance to the home Harry designed for himself and his wife, Ruby: “Connect a square of nine dots with four lines without raising your pencil off the paper.”

To solve the puzzle, you have to “think [draw] outside the box.” It’s a concept that took center stage as he began a career as an architectural engineer and illustrator in Chicago.

An example of his visionary thinking is his scheme for residential pods that could be moved by helicopter from a tower in one city to a tower in another city. Imagine not having to pack and unpack all the stuff you have accumulated or having to figure out how to place furniture in one space that you bought for an entirely different space. When Harry presented his plan to Kaiser Industries in 1965, an executive dismissed it only because he thought abiding interstate commerce would present an insurmountable problem. (Harry got his concept patented — patent No. 3388512 — in 1968).

In creating his Palm Springs home, Harry was free to exercise his nonconformist bent. No interior walls reach the ceiling. Uncovered OSB board serves as raised flooring in the entryway and bedroom. A tool chest provides handy storage in the kitchen. Paperclipped cardboard tubes support a triangular sheet of glass comprising the coffee table. The anomalies keep your eyes entertained.

On one wall hangs a large rendering of the tower pods, showing a helicopter ready to move one residence. Nearby is a photo of a young, Warren Beatty-looking Harry holding rolls of drawings (above), and photos of the accounting office for A&M Studios (now Henson Recording Studios) on La Brea Avenue in Los Angeles.

After building his first recording studio, Harry was hired by Herb Alpert to design one for A&M. He was there when Barbra Streisand inaugurated it.

Connections — and getting invited to L.A. parties — opened many doors for Harry. Steven Spielberg hired him to remodel his Pacific Palisades home that originally belonged to Douglas Fairbanks Jr. While Spielberg was gone for six months filming one of his blockbusters, Harry was busy remodeling the house (the prime directive being to make it comfortable). The producer/director loved the results so much that he subsequently enlisted Harry for his Malibu Beach home.

Ruby had plenty of her own achievements. She once was on staff at Otis Parsons School of Design, designed costumes for movies and manufactured jewelry that ultimately was carried in hundreds of stores.

Before that success, she had thought of pursuing a career as a singer, but hated the attendant lifestyle. During my visit, Harry pulled out a recording of her singing jazzy tunes she wrote, with Broadway composer Jule Styne’s accompanist on piano.

One might assume that Harry and Ruby met at a high society soirée and hit it off because of their mutually creative professions. In fact, they met at a bowling alley when they were in their mid-teens. Their relationship obviously was meant to be.