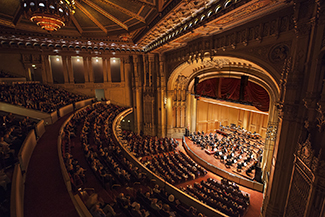 According to Pandora (or, as I often mistakenly call it, Pandora’s Box), my favorite music genre falls under the category of boogie woogie. I do love flashy, thumping piano, which probably accounts for the fact that — on the rare occasion when I listen to violin — I prefer a violin with attitude, aka Cajun fiddling.

I once made the mistake of taking my neighbor up on an offer of free, front-row tickets to a violin trio concert in La Jolla. I suppose I should have known that just the words “violin,” “trio” and “concert” strung together imply classical. But all I could think about was the opportunity of getting out of the house and going somewhere — anywhere — with my mother, who was on her second week of a driving-me-insane visit. What I heard were the words “free,” “front-row” and “La Jolla.”

Unfortunately, we didn’t stay out as long as I had hoped. From our front-and-center view, the exaggerated body movements of the three violinists, complete with seemingly synchronized up/down head snaps, brought us to a fit of giggling that became outright snorting and guffawing until tears were streaming down our cheeks. We knew we had to leave before someone threw us out.

So when I received a recent invitation with the three words “Copley,” “Symphony” and “Hall” in big letters, I wasn’t too enthused. But underneath those words were four smaller ones that said “Photography by David Hartig,” which got my attention because David used to be a shooter for San Diego Home/Garden Lifestyles’ On the Scene column.

For more than 10 years, though, one of his main clients has been the San Diego Symphony. The invitation wasn’t for a concert. It was for an exhibition — at the University Club atop Symphony Towers — of David’s behind-the-scenes shots: “an artistic journey of the visual treasures housed in the former Fox Theater, from the magnificent chandelier to the lesser-known carbon arc projectors used to show silent films.”

David’s photos captured the grandness of the theater, as well as some candid shots of orchestra members.

If Pandora kept tabs of my likes in artworks, I bet the profile would give a thumbs up, toot-diddelyada-toot to David’s fine art photography.

You can see more of David’s work at http://www.davidhartig.com.