Working Out a Restoration 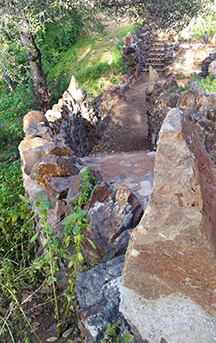 My $10-a-month fitness gym closed rather abruptly; and just as quickly as they shut down, my weight shot up. I needed a new fat-cell outlet and chose walking because, like the breeze, it’s free and easy.

I live in Golden Hill and didn’t want an uphill battle, so I opted for a two-mile path that leads down C Street, wanders along the golf course, crosses 26th Street and meanders into the approximate half-mile loop of Golden Hill Park.

The first time I did this walk, I stumbled into the park during sunset when the golden glow (hence the moniker, I assume) surpasses views of the golf course and downtown. A heavy scent of pine along the northern trail reminded me of childhood camping days. Squirrels were chasing each other up tree trunks, and crows in higher-up branches cawed warnings.

The trail brought me to a paved loop that travels around a wide expanse of grass that, this day, was being employed as a soccer field and leashed-dog playground. On the other side of the pavement, families were wrapping up leftovers, discarding their paper plates and carefully folding plastic cloths that had earlier made jaunty picnic-table coverings. The aroma of their grilled dinners still hung in the air.

Strolling along the paved road to get to the exit on the south side, I glanced over to my right and noticed what appeared to be rough-hewn stone steps leading down a nasturtium-laden canyon into an old grotto. Intrigued by the ruins, I wanted to venture down; but dusk was quickly falling into night, so instead I headed home, where I did an immediate Google search. Here’s what I discovered:

In 1907, architect Henry Lord Gay (known for his design of downtown’s Western Metal Supply Building) began designing the site. The idea was to create an old-fashioned spring with cascading water that would be shaded by ferns and shrubbery and would become a secluded photo-op spot for visitors to enjoy nature. Golden Hill residents contributed $75, which the park commission matched. The project was completed in 1908.

Today, Golden Hill Fountain Grotto, as it has been dubbed, needs some tender care. A barricade has been placed atop the irregular rock to keep it from being misused as a fire pit. The romantic pair of curved, cobblestone steps, which lead to the font from either side, look like they have been lovingly restored. Recently planted native succulents poke their blue heads above ground adjacent to the fountain. Perhaps the drought has temporarily halted restoration.

Every so often as I’m out on my walk, I’ll take a peek and see how things are progressing. But if I want to start progressing on my own restoration, I should probably stop strolling and start power-walking. I also should probably quit the Krakatoa Ubehebe habit on my way home.

And, no, I don’t know how to pronounce the coffeehouse or the sandwich. I just say “Crack-a-toe-uh” and people seem to know where I’m going, and, then, say “You Be He Be” when I place the order and the telera roll filled with turkey, bacon, cream cheese and cranberry sauce appears on my table.