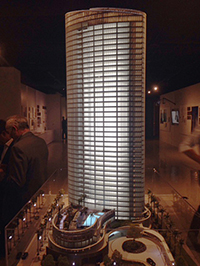 When the first words you hear from an architect describing a project in the making are “This is a different cat,” you sense that you are about to be entertained. Such was my impression at a private preview of downtown’s Pacific Gate residential high-rise.

“This could have been a solid-profile building, as many buildings are that are functional,” said New York-based architect James von Klemperer of Kohn Pedersen Fox Associates as he stood by a model of the building his firm is creating for Bosa Development.* “There’s something about tall buildings we remember in skylines; it’s always the ones that come to some sort of peak. They’re aspirational.”

The 41-story, 450-foot tower (scheduled for completion in September 2017) is “sculptural, but not a wacky form,” he continued. “It’s quiet. It’s Catherine Deneuve — poised and self-confident.”

When I asked him which of KPF’s multiple high-rises Pacific Gate would most resemble, the president of a firm with six offices around the world didn’t pause to reflect — perhaps because what popped immediately to mind is a current project: a 123-floor (1,800+ feet) combination of offices, hotel, retail and residences in Seoul. Pacific Gate, he said, would have “the same DNA.”

Set between Broadway and West E Street along North Harbor Drive, the building will be “kind of a gateway, an entry sign to the city of San Diego from the water,” James said. The elongated curvature of the “yin-and-yang” halves of the double-arc, oval design with a fin “captures the spirit of water and ocean movement.”

Opening with a public event on Sunday (noon-3 p.m.) and by appointment thereafter, the Pacific Gate sales gallery at 700 First Avenue includes a few room vignettes (with curved, printed downtown view windows) to give potential buyers a peek at the concepts created by Hirsch Bedner Associates, the Santa Monica-headquartered firm in charge of designing all interior spaces.

That’s all well and good, but I personally considered another perk a greater incentive: a private boat share. Nat was not certain the exact length of the boat (“But it’s sure not going to be a dingy,” he joked), then asked someone else and came back to report it would be in the 45- to 50-foot range. He added that it will have a professional crew.

There’s a more altruistic incentive that also caught my attention: For every unit sold, Bosa Development will make a contribution to World Housing to build a 64-home community in the Philippines to house 300 people living in slums in Manila.

When I asked Nat the price for the penthouse, he replied that it was “spoken for,” but indicated it was a $15 million condo. Pressed further, he revealed that he personally would take possession of the tower’s topmost residence (6,000 square feet with a 3,000-square-foot balcony on which he plans to install a garden).

*To read an interview with Nat Bosa, check out the March issue of San Diego Home/Garden Lifestyles.