From Boiler to the Trier 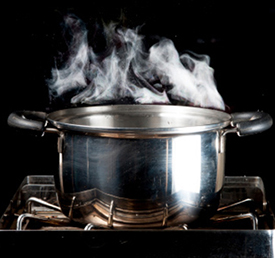 Most children pick up cooking skills from their mothers. My mother was a boiler, i.e. her talent for cooking was limited to boiling food in water-filled pans on stovetop burners. Potatoes, salad greens, canned veggies, hot dogs, chicken and even round steak would merrily bubble along until mom deemed them edible — usually at the mush or shoestring stage.

When I was living on my own and single, I boiled everything too. After a couple of marriages and kids, I also learned how to fry and stir-fry. I even baked a cake — once. I got so excited when it turned out that I dropped it on the way to the dining room, where it landed upside down on the carpet in a pile of cat hair.

I’ve never learned how to use a grill, a broiler or the griddle thing-a-ma-jig in between my stove’s burners.

Nor do I thirst for that knowledge. After all, if I want something more than the basics, I can always go out to eat — as long as I have a handy guidebook to figure out what’s on the menu.

Hey, I’m one of those people who pronounced quinoa as kwin-oh-aah for months, so today’s menu listings of trendy foods are a bit difficult for me to digest. I’d be happy if the menu simply read bass with Brussels sprouts, but no, it’s “miso-glazed sea bass with apple kimchi Brussels sprouts and five-spiced butternut squash purée.” Can I get just four-spiced, please?

And, what’s à la mode now, of course, isn’t pie — it’s kale. Served as chips, salad, a smoothie or the main veggie, I’ve seen this healthy green on menus steamed, blanched, grilled and blended. But I have yet to see it boiled. Hmm, maybe there’s a reason for that.