Under a California Sun

The setting couldn’t be more serene: 100-plus rolling acres in Rancho Santa Fe dotted with three lakes, edged with citrus groves and crowned with a Ken Ronchetti-designed residence.

But the New Yorkers who have called it home since the early 1990s were shaken when a recent wildfire burned within two blocks.

“The need for a more fire-resistant landscape became urgent,” landscape designer Christiane Holmquist says. “Plus, there were water shortages and increasing calls for conservation. My clients had tried to replicate an East Coast garden here, but it was languishing under California skies. It was time for change.”

The home’s entry, with its distinctive cream limestone wall, walkway and pillars, became the starting point for an ongoing transformation to eliminate thirsty turf and aged, flammable shrubs and trees. 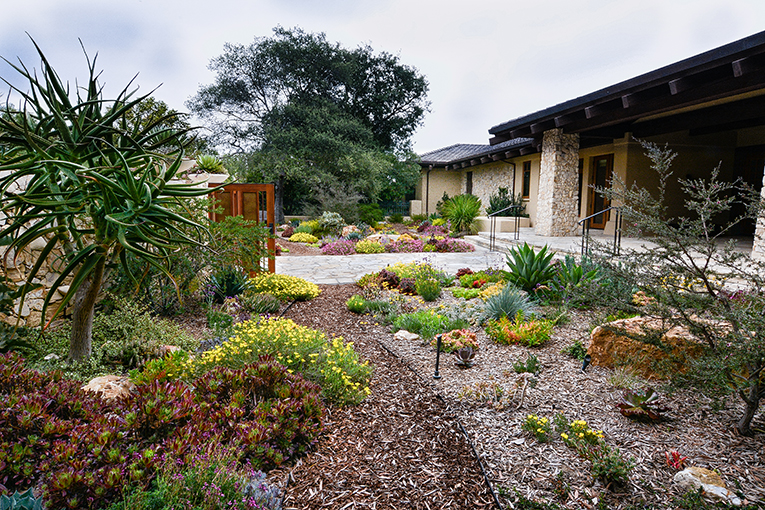 “Step by step, we are rebuilding the garden,” Christiane says. She is plotting updates along the driveway and around the pool. “We’re using a tapestry of region-appropriate plants to put nature back into the garden — to help it rediscover its soul.”

When Christiane embarked on the project three years ago, tired landscaping inside and outside the front gate had been removed, leaving behind mostly bare dirt. Among the few exceptions were two majestic trees in the courtyard — paperbark (melaleuca) and coast live oak (Quercus agrifolia) — that the homeowners wanted to show-case in a welcoming garden.

Their affection for rocky alpine gardens colored land-scape choices, including honey onyx boulders that echo the home’s warm woods and mulch paths edged in black aluminum that, Christiane says, “give the appearance of an old garden.” 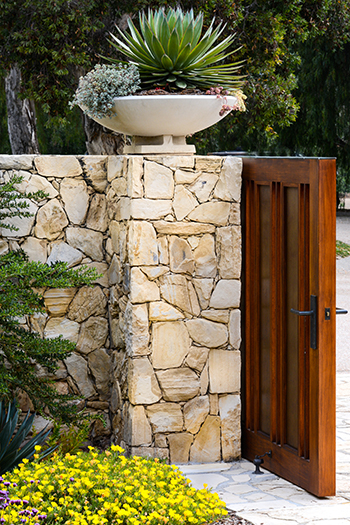 Intriguing plant combinations in the homeowners’ favorite pinks, purples and yellows reflect their growing regard for succulents, California natives and other water-wise plants.

On both sides of the lime-stone walkway, cheery yellow sundrops weave below dainty, pink-flowered pelargoniums and dancing lavender wands. Nearby, ferny ‘Sunset Gold’ breath of heaven contrasts with velvety Kalanchoe beharensis leaves, and the fiery edges of ‘Blue Glow’ agave reflect the glowing arms of ‘Campfire’ cras-sula. All are carefully pruned to look both natural and neat.

The courtyard’s perimeters and areas under tree canopies are largely home to native plants that, Christiane says, give the garden a sense of place. Wild lilac, manzanita, hummingbird sage, ‘Margarita BOP’ penstemon and bush anemone add scent and color that attracts birds and bees.

Soothing sounds bubble from a boulder selected for the courtyard water feature.

“My clients preferred a rug-ged, natural look rather than a millstone or other manmade element,” says Christiane, who softened the scene with orange-flowered, bat-faced cuphea and other delicate blooms.

A crane lowered boulders in place, along with boxed trees selected for the sloping beds outside the courtyard. Now, weeping acacias, strawberry trees and ‘Forest Pansy’ redbuds and strawberry trees join live oaks in spreading dappled shade over toyon, wild lilac, protea and other shrubs, swaying grasses and ground-hugging succulents.

Flanking the entry gate are two planters dominated by tall, multibranched yuccas — survivors from the previous landscape now underplanted with yellow damianita daisy, lavender pebbles (Graptopetalum amethystinum) and other succu-lents. All are a fitting welcome to the California-style garden in progress.

“By definition, a garden shows the hand of man,” Christiane says. “But when you connect a garden to nature, that’s when you feel at home.”