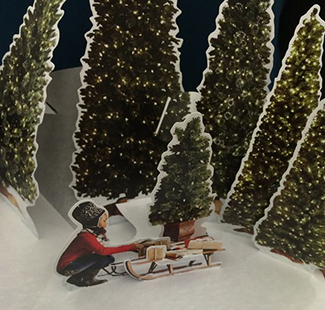 Those marvels of paper engineering still manage to amaze the push-button iPad children of the 21st century. Tots love to open and shut the pages and seem surprised even after the hundredth time of watching the same 3-D illustration come to life.

Ironically, these pieces of fun were initially invented for adults, not children, as an aid to understanding difficult mathematical or scientific concepts. A Benedictine monk created the first movable book in the 13th century. It contained revolving disks placed one on top of another to illustrate his search for truth.

Kids weren’t privy to owning one of these books of wonder until almost five centuries later, when London printer and bookseller Robert Sayer developed lift-the-flap books. Then, in the 1930s, movable books took a giant leap with S. Louis Giraud’s Bookano Stories. Each scene unfolded in a double-page spread that could be viewed from a full 360 degrees.

Giraud’s series inspired Harold Lentz, who produced Blue Ribbon’s imaginative books in New York. Lentz was the genius who came up with the pop-up label. He used it as a clever marketing technique.

Another clever marketing technique? This year, Pier 1 Imports transformed a New York City storefront into a life-size, Christmas, pop-up storybook. Instead of the search for truth offered by the monk’s pop-up book, visitors searched for Pier 1 gifts by walking through magical scenes of a giant catalog.

I didn’t get to take that stroll in New York City, but I was lucky enough to be one of the 3,000 people on Pier 1’s special mailing list to receive a normal-size, spring-to-life catalog. Designed by award-winning paper engineer Bruce Foster, it is filled with bright ideas for holiday décor that are carefully folded, cut, glued and inserted to jump up on each page.

If you weren’t one of the 3,000 to receive the limited-edition catalog, don’t be discouraged. It will pop up if you use the hashtag #pier1popup or visit this site: http://www.pier1.com/Pier-1-Imports-Pop-Up-Book/pop-up-book,default,sc.html