Ya Gotta Love It 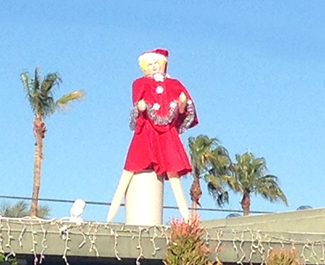 In the midst of a home-improvement project in Palm Springs this past weekend, I had to run to Lowe’s. Driving by the private airport where one can often spot Leer Jets, I caught a glimpse of a DC-3 and standing next to it a small group of people, including Santa Claus. I suppose his sleigh was in the shop.

In the Lowe’s parking lot, I noticed a snowman looking skyward with his neck stretched as far back as it would go. I speculated that he was trying to catch some rays so he wouldn’t look so pasty white. But then I saw a man sporting a Lowe’s-blue vest pumping air into the snowman and his head popped back up. Now the poor tan-seeker had to spend the rest of the day under the brim of his black hat, staring across the parking lot, watching people load paint and lumber into their vehicles. I was tempted to let a little air out of his pumped-up body, but I cannot risk being barred from Lowe’s (when you have a house built in 1960, you have to go there a lot).

When I returned home, I saw that my neighbors had accomplished a project of their own. Standing proudly on their Mid-century Modern butterfly roof was Marilyn Monroe in a Santa outfit holding a tinsel garland. A friend of mine says, “I suppose there’s imagination and then there’s what’s on the other side of imagination. Truly there are ways to celebrate the holidays that I have never considered.”

She’s right on both counts. And that is one of the reasons I love Palm Springs. The folks there, real and pretend, march to the beat of their own drum.