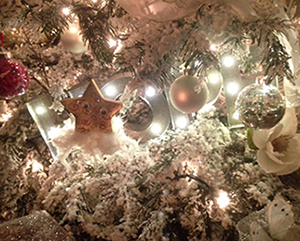 It snowed on me in Lemon Grove last night. Santa told me it was soap flakes, but I didn’t care. It made me feel Christmasy without making me cold and wet, the combination of which I particularly dislike.

After my chat with Santa near the falling-snow entrance of Thompson Building Materials (where I intentionally gathered flakes “to go” in my purse), I walked around gazing in admiration at the display of designer-decorated Christmas trees. This was the second annual Tree of Dreams fundraiser, presented by Thompson Building Materials and San Diego Home/Garden Lifestyles, to raise money for Rady Children’s Hospital. In addition to a silent auction on a table inside Thompson’s showroom, the trees outside were auctioned during the evening by Cody Montarbo, who clearly enjoyed his role, joking and laughing while encouraging bidding.

California Closet’s tree, themed “Peace on Earth,” included ornaments depicting areas around the world, including the Eiffel Tower, Big Ben and a buddha.

M Studio’s “Tree of Sea Stars” was “made to embrace San Diego beach lifestyle and convey our city’s togetherness.”

Next to it, Neil Alan Interior Design’s tree was inspired by See’s Candies’ donation to the cause. Designer Neil Tabiu used a black-and-white-checked ribbon garland, mimicking the iconic See’s store tile floor. In addition to brass and gold decorations, the tree was adorned with boxes and tins of sweets. During the auction, Neil said the winning bidder would be getting 18 pounds of chocolate and eight tins of peanut brittle.

Designers Resource Collection created an “Enchanted Seaside Holiday.” The sign next to the tree indicated that every member of their staff contributed time and effort to make the ornaments.

At-Hom partners Lee Thomas and Richard Romano had taken ornaments to Rady Children’s Hospital to let the kids there handcraft hearts and stars for their “Joy and Hope” tree (see above photo).

Esteban Interiors’ “The Birds and the Bees” tree was filled with red cardinals, glittery gold nests and a ribbon garland of “honeycomb” speckled with bees.

Nate Nathanson’s tree also had birds, as well as feathers and teardrop and snowflake ornaments.

Inplace Studio decorated their tree with 400 ornaments in a mix of red and fuchsia. Their sign read, in part, “We wanted to show everyone that a tree can still feel ‘traditional’ with a flair of modern.”

Meanwhile, Christopher Lee Home’s serene “Healing Waters” tree was white with a blue accent. (SDH/GL’s Dana Sutton will have that tree in her home this year, thanks to her husband Kevin’s winning bid.)

Marrokal Design and Remodeling decorated its vintage-inspired tree with silver and gold mercury glass ornaments, white feathers and a long strand of faux pearls. The company bid $1,500 for its tree for the purpose of donating it to a deserving family.

Thompson Building Materials also decorated a tree for the auction. Their red, white and blue tree — topped with two U.S. flags — was filled with superheroes like Batman and The Avengers.

Some trees sold for hundreds of dollars, making them a bargain ready-for-Christmas option for those who don’t want to or don’t have time to buy, strap to their car, carry into the living room, set up and decorate a tree. As a bonus, Thompson Building Materials offered to deliver the trees for free.

One bidder paid $5,000 for a tree, then donated it back so that it could be auctioned again, which inspired someone else to bid $5,000 for it.

In just its second year, the event raised more than $18,000 for Rady Children’s Hospital. Having attended both years, I have concluded two things:

1. People in the design trade really get into the spirit of giving.