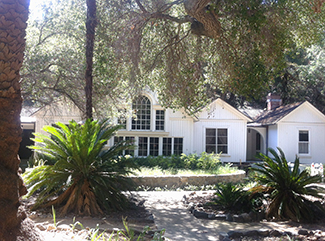 Try to find the Modjeska House with an online map and you’ll probably end up driving to an Irvine strip mall. At least, that’s what my friends and I did when the “birthday girl” of our trio opted for this destination as the celebratory outing.

Months later on my birthday, we finally found the place by calling the reservation number. The person who answered the phone laughed and said, “You can’t use Mapquest to get here.”

Perhaps many are enlightened about the inability of Mapquest to locate the Modjeska House, but a lot of people are in the dark regarding the property and its long-ago owner: a Shakespearean actress from Poland named Helena Modjeska. In fact, Mel Brooks once quipped that she was “world famous in Poland.”

It was Helena’s husband, Count Karol Bozenta Chlapowski, who had the wild dream of forming a utopian outpost of communal living à la Brook Farm. So, in 1876, they boarded a ship with a small group of artists and intellectuals (including Henry Sienkiewicz, a journalist who later won the Nobel Prize for literature) and made their way to the New World, living first on a small farm in Anaheim.

Milking cows and tilling land wasn’t quite the pastoral lifestyle that these highbrow, creative types imagined, however, and farming soon lost its entertainment value.

Nonetheless, in 1887, they bought 14 acres 10 miles from the railroad and 23 miles from the nearest town of Santa Ana. Charmed by the wilderness of oak trees, uncultivated lilacs and honeysuckle, an expanse of meadow and its location on the banks of a creek, they settled into a modest bungalow framed by the Santa Ana Mountains. They named the land Arden after the Forest of Arden in Shakespeare’s play As You Like It.

Having learned their lesson about the difficulties of farming life, they employed professionals to handle the ranching. They used the home as a peaceful retreat between traveling from stage to stage; because by this time, Helena had mastered Shakespeare in the world of American theater. Audiences and critics put her on par with Sarah Bernhardt as an actress. And after starring with Edwin Booth (brother of assassin John Wilkes Booth) and touring with Maurice Barrymore, she was considered one of the greatest actresses on the English-speaking stage.

In 1888, the couple hired Stanford White (the architect who designed Madison Square Garden, as well as mansions and clubs for the Vanderbilts, Pulitzers and JP Morgan) to transform the home into a five-gabled, Victorian country manor.

A home’s heart usually resides in the kitchen; but in this home, it beats in the living room/library, where a massive rock fireplace dominates the space. Tall windows with leaded glass reach toward a 16-foot cove ceiling. In Modjeska’s time, more than 2,000 books in several languages filled 6-foot bookcases that lined the walls here.

Off a narrow hall, side-by-side bedrooms open to a wide porch. There is a third bedroom, as well as a costume room. Off the kitchen is an office. After 1893, a dining room was added and interior walls were sheathed. One of the bathrooms has a ruby glass window. There are other buildings on the property, including a two-bedroom guesthouse.

In 1906, no longer able to afford the upkeep of the property, Helena and Karol (who may have been noble but was not really a count) sold the home and moved to Newport Beach. In 1986, Orange County bought the property, turning it into a historical park that, for a nominal fee, is open to visitors — who will only find its off-the-beaten-path site by calling 949-923-2230 and making a reservation.