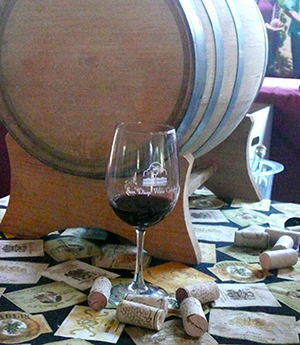 It seemed fortuitous that Edison James Riggs was singing “King of the Road” as we were making our way to a white tent on the grounds of Cottonwood Golf Club in El Cajon. That’s because the Sunday afternoon event was an early culmination (if one can imagine a series of culminations) of a Highway 94 story I began working on almost a year ago.

That story, titled “Roots on the Route” ran in the June issue of San Diego Home/Garden Lifestyles magazine. It was about efforts to establish a wine-tasting corridor along the main road running through the southern edge of San Diego County.

As reported in that story, East County Chamber of Commerce General Manager Eric Lund, at a late January chamber luncheon, announced plans for a wine, beer and food tasting event to bring more attention to the area’s gustatory attractions. Sure enough, people tasted their way around the white tent at Cottonwood Golf Club, talking with owners and representatives of wineries and enjoying wine, beer and food. Local artisan cheese, olive oil, balsamic vinegar and honey were on display for sampling as well.

A Toast to East County included wineries along the 94 Corridor, as well as from Ramona, Alpine and La Mesa. Greg Maness, owner with his wife P.J. of Maness Vineyards in Jamul, used the occasion to present this year’s Trail Blazer Awards.

The first award went to Bill Schweitzer, a pioneer of vineyard growing in Ramona and one of the founders of the Ramona AVA. He helped develop the San Diego County boutique winery ordinance and recently established an olive oil company.

“I am just a guy who throws pebbles into a pond and sees where the pebbles go. Lum Eisenman built the pond, and Pete Anderson filled that pond with ideas,” Bill said, referring to the other two awardees.

Now in his 80s, Lum learned about winemaking at UC Davis and since then has served as an inspiration and mentor to many local winemakers. He founded the San Diego Amateur Winemaking Society, wrote The Home Winemakers Manual, and has taught wine-related courses and workshops at Mira Costa College.

He noted that when he moved to Del Mar in 1971, there were five wineries in San Diego County. Now there are 115 licensed wineries and who knows how many people growing grapes and making wine for their personal consumption. There’s definitely history here (California’s first recorded vineyards were planted in San Diego by Father Junípero Serra), but there’s also definitive movement in the county’s winemaking aura.

Later, at the Maness Vineyards table, I sipped a 1989 Port (see the barrel in the above photo) and sampled their newest product: a delicious Zinfandel jelly. I also tasted their blackberry-infused Syrah. I asked Greg what gave him the idea to try a technique with wine that is commonly associated with vodka.

“I think we were drinking Jack Daniels,” he replied, smiling mischievously.

True or not, it was a satisfactory answer for me. I like the idea that winemakers are fearless experimenters, whatever their motivations.